Dr. Michael Klemens, author of Pathways to a Connected Adirondack Park: Practical Steps to Better Land Use Decisions (2017 by Adirondack Wild)  writes that, “since human activities so profoundly affect the natural world, why can’t human intelligence and technology which drive destructive trends in land use be better applied or retooled through education and information to create human landscapes that are more in harmony with the natural world?” 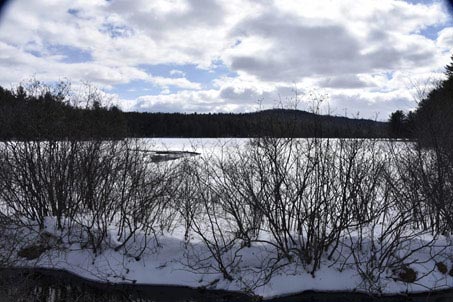 The Adirondack Park Agency has been trying for 16 months to educate and inform one prospective developer of Woodward Lake (37 lots requested), near the village of Northville, about how to gather information and apply that data intelligently to design his proposed subdivision to be more in harmony with the lake and the approximately 1200 heavily forested acres above the lake. Adirondack Wild has been an outspoken advocate for conservation subdivision design of this subdivision and others throughout the Park and through its publication Pathways, public presentations and written and verbal inputs to the APA has also been trying to educate this developer and others. See Adirondack Wild’s recent comment letter to APA and press release.

However, judging from the Woodward Lake applicant’s mid-February 2020 submission to APA he still appears not to have gotten the message.

After being asked by APA in 2018 for “alternative configurations that leave more of the lakeshore undeveloped and/or better concentrate development,” February’s application persists in configuring the subdivision in ways APA criticized in 2018 by ringing the entire lakeshore with new residences and driveways, leaving just a 100-foot shoreline buffer. The application also fails to minimize new areas of disturbance and fails to concentrate development to the maximum extent practicable as required by the agency’s application guidelines. 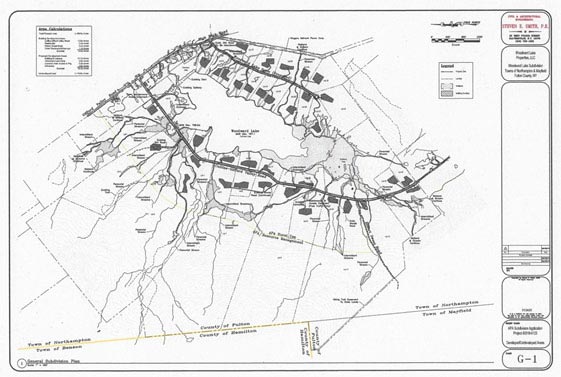 Woodward Lake subdivision layout in Feb. 2020. Some modifications have been made since.

In 2018 APA staff advised “locating development to maximize overlap” of building areas, driveways and roadways.  Instead of clustering the entire project so that all impacts are minimized and overlapped as much as possible, the applicant creates about 8 different “clusters” on all sides of the lake and in the forests above the lake. While each cluster of 3-4 home sites do appear to overlap their impacts, the many separate clusters, totaling 35 new residences, end up spreading ecological impacts across the entire project area – precisely the opposite of the APA’s instructions.

The developer’s application also makes the extraordinary claim, without citing evidence, that dividing up more than 600 acres of forest outside of the building envelopes into seven separate ownerships will result in better forest management than if he kept that acreage in one contiguous 600-acre block. Most foresters would strongly disagree.  Imagine trying to gain agreement from seven different owners on redesigning their one common area, kitchen or living room.

The applicant appears to perversely ignore the APA’s advice and requests, but in truth he is only following a familiar path that successfully led to previous APA permits. At nearby Woodworth and Hines Lakes north of Gloversville for example, the same applicant in 2014-15 received an APA permit for 17 new home sites on 1100 acres despite widespread public comment that this application failed to conduct a comprehensive biological inventory and assessment and failed to overlap damaging ecological impacts.

In 2014 as in 2020, the same applicant offers the same rationale why a true conservation subdivision design of new Adirondack homes is impractical and impossible – that the lots won’t sell or, to be more precise, won’t sell at the price point desired by the developer. “The final design of a traditional style cluster plan would create lots that do not meet the target for this real estate market location,” writes the applicant. Without providing APA with so much as a sketch of what a conservation design might look like (as requested), the developer naturally places his marketing and sales prerogatives well ahead of park policy and planning objectives. He will continue to do this – as long as he is allowed to do it.

The developer also faults the lake’s difficult natural resource constraints (plenty of wetlands, shallow soils, rocky substrates) for difficulties in locating suitable on-site septic. This is certainly a practical concern. But, given the APA’s stated goals of conservation design the applicant has a choice of downsizing the number of lots so that fewer of them could be better concentrated while also providing for suitable soils and separation distances for the on-site septic (he won ‘t consider extending expensive public utilities to the site).

In February, the developer refused to consider fewer lots. As at Woodworth Lake in 2014-15, this 2020 developer apparently expects APA to treat his Woodward Lake application as complete and to permit it largely as presented.

What should be done now? APA should declare this application incomplete and make it crystal clear that in order to make progress the applicant must submit an alternative design that better concentrates development areas, protects the lake’s water quality and maintains large contiguous blocks of upland forest to comply with the purposes and policies of Resource Management land (colored green on the APA map).

If the APA caves in once again and issues a permit for such a wasteful and fragmenting lot configuration based largely upon the developer’s marketing and sales claims, that would be a clarion call for new state legislation which would mandate that the APA use conservation design principles for large Adirondack Park subdivisions like this one. The legislation is Assembly Bill 8123-a and Senate bill 6484. A diverse coalition of Adirondack stakeholders, including Adirondack Wild, local government representatives and forest industry representatives, has worked extensively on the bill and has endorsed the legislation.