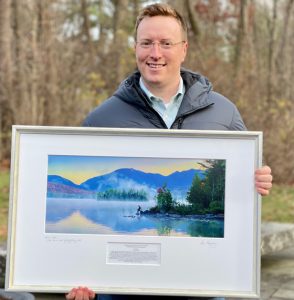 Adirondack Wild: Friends of the Forest Preserve has presented its 2020 Paul Schaefer Wilderness Award, the organization’s highest honor, to Kevin Chlad, Director of Government Relations for the Adirondack Council with offices in Elizabethtown and in Albany.

“I am deeply humbled by this recognition and share this honor with my colleagues at the Adirondack Council, as well as our fellow environmental partners,” Kevin Chlad said. “The clean water and wildlands of the Park hinge upon on our collective efforts.”

In 2016 Chlad organized volunteers from across the state for the Adirondack Park Wilderness Campaign, which resulted in a Wilderness classification for the Boreas Ponds and to the most significant expansion of the High Peaks Wilderness area in decades. His persistence each year also results in more funding for Forest Preserve stewardship, an important part of the state’s Environmental Protection Fund. Kevin played an instrumental role in organizing the 2020 Adirondack Park Environmental Lobby Day to heighten legislators’ consciousness about the Adirondack Park which led, in part, to passage of the Randy Preston Road Salt Reduction Act of 2020. That legislation awaits Governor Cuomo’s signature. “Adirondack legislative coalitions are more effective today thanks to the tireless efforts of Kevin Chlad. For that Paul Schaefer would be celebrating,” reads Adirondack Wild’s award which features an original photograph “Elk Lake – In the Middle of Everything Wild” by Adirondack photographer and Adirondack Wild staff member Ken Rimany.

Adirondack Wild’s Ken Rimany adds his thanks to Kevin Chlad “not only for all that you continue to do to preserve the wild of the Adirondacks today, but also, as Paul Schaefer would often remind us, for the ‘youth of distant tomorrows’ as well.”

The Paul Schaefer Wilderness Award is named for foremost 20th century wilderness champion and Adirondack coalition leader Paul Schaefer (1908-1996). Schaefer founded Adirondack Wild’s forerunner, Friends of the Forest Preserve 75 years ago in 1945. Following his death in 1996, Schaefer was named as one of 100 of the nation’s most influential conservation leaders by Audubon magazine.