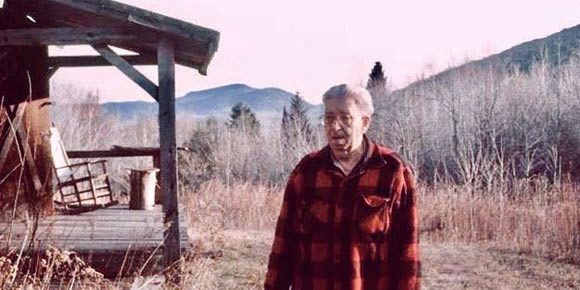 Adirondack wilderness champion, conservationist, author, filmmaker and hunter/fisher Paul Schaefer (1908-1996) was a pied piper for young people in search of a cause, just as John Apperson and Bob Marshall had been for him when Schaefer was in his early 20s. During the 1980s and ’90s, Paul was in his eighth decade of life, and scouts, teens and Earth activists of all ages found a way to Paul’s doorstep in search of wisdom and to gain a sense of Adirondack history and current direction.

I was one of those younger people seeking his wisdom. Thanks to my job with the Association for the Protection of the Adirondacks, my office was close to Paul’s home, affording me easy access to him. I share here a few of the lessons that Paul Schaefer imparted to me around Earth Day.

One spring day in 1990, I met with Paul to discuss the contents of Gov. Mario Cuomo’s Commission on the Adirondacks (“Berle Commission”) report, which was about to be made public. In opening our conversation, Paul recounted that on Earth Day that year, a group of “idealistic” young people had come over to his house to pay him a visit. He had planned to show these teenagers his award-winning film, “The Adirondack — The Land Nobody Knows,” but his Bell and Howell 16-mm projector could not be found. (I had borrowed it and not yet returned it.)

Instead, Paul invited the students into his living room. “I’ve never had a better time in my life,” Schaefer told me. “These kids were idealists, and we need them.”

The young people declared that one of their proposals was to do away with Route 28-30 between Blue Mountain Lake and Tupper Lake. “You mean you want to close the road?” Paul asked. “Yes,” they responded. “It damages the wilderness character of the park.”

Paul challenged them. “Before you come up with some hair-brained scheme like that, you take me up on this challenge to you. Start at my cabin near the Siamese Ponds Wilderness, and walk the 15 miles across that wilderness to Indian Lake, taking a tent, pack and compass. Until you do that, you don’t know what wilderness is. You have no conception of it.

“You can’t possibility advance your cause by closing a road, the lifeblood of the economic well-being of the park, for wilderness reasons if you haven’t crossed a wilderness area on your own two feet and know what it’s about,” Paul continued. “If you want to advance your cause in the Adirondacks, you’ve got to temper your idealism with realism.”

He was very stern with them, but he closed with, “I’d love to have you come back and talk more.” They were very surprised to learn they had been invited back after the lecturing they had received.

On another Earth Day in the early 1990s, Paul was asked to give a presentation at the local high school. The student who issued the invitation told him that “kids my age just aren’t interested in the environment. They’re not motivated.”Paul responded, “I’m sorry to hear that, but it doesn’t matter to me how many show up.” It turns out Paul couldn’t make it to the high school that Earth Day, so he asked a fellow Adirondack activist named Bill White (Bill was also a protege of John Apperson) to deliver the program in his stead.
Afterward, Bill White dejectedly reported to Paul that only two people had showed up for the Earth Day lecture, including one female student and her teacher.

Schaefer responded, “Bill, you’ve got to remember that in 1946 I took the train out to Broome County, Binghamton, and we went all that way to talk about the Moose River Plains in the Adirondacks, and our fight to prevent the dams from flooding it. Only 15 people turned out for the meeting. Oh, it was bitterly discouraging to have brought ourselves and our information so far for only 15 people.”

“But remember, Bill,” Paul continued, “while we needed thousands of brochures opposed to the dams to be distributed in Binghamton over the next few days, among the 15 in our audience was a man who stood up after our presentation and said, ‘You give me 50,000 of those brochures, and I could use another 50,000, and I will distribute every one of them.’

“It turned out that Broome County produced the most votes in 1955 to defeat the Panther Mountain Dam proposal (to amend Article XIV, the ‘forever wild’ clause in the New York State Constitution, to build a huge power dam on the South Branch of the Moose River). Never underestimate that one person among 15, or among the two in your high school audience.”