I just skimmed through Eric Stackman’s recent replies to the Adirondack Park Agency. See the APA website, apa.ny.gov, large-scale subdivisions. Mr. Stackman, a Miami, Florida developer, wants to construct a 120-lot resort subdivision in Jay, Essex County, above the East Branch of the Ausable River, apparently within sightlines near Whiteface Mountain, Asgaard Farm and many other viewing locations

Now that somewhat better information about what lives and grows on the 385 acres has come into the APA during August, it appears that community-wide concerns about Stackman’s proposal are amply justified. There appears to be a large number of actual and potential negative environmental impacts from his proposal.

The preferred layout of the lots and over 2 miles of new roadways would take place on more than ten acres of slopes designated as steep or severe. That’s not good. Those are obvious red flags where development should not take place. So is the fact that parts of the subdivision would be occurring well within the one-quarter mile Recreational River area adjacent to the East Branch Ausable, and its runoff would be entering that river. Parts of the subdivision are also lying directly over a mapped aquifer. The project’s visibility could also be very significant, as it would be located on high ground seen from nearly all directions, from both sides of the river. 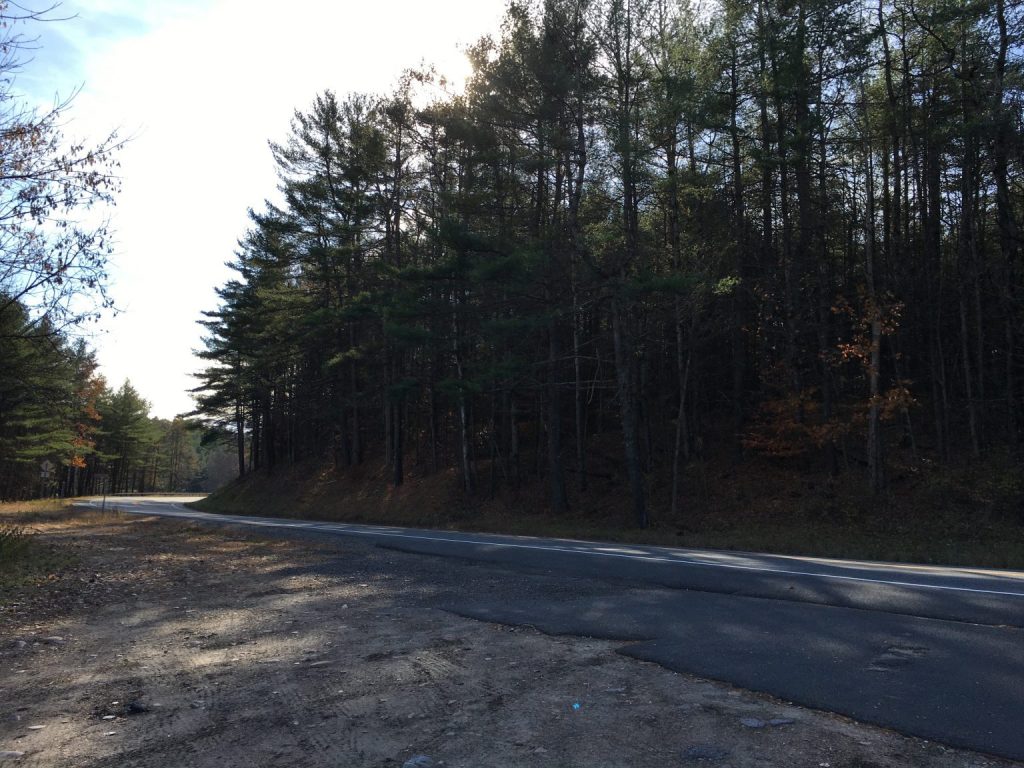 The area of Rt. 9 where the Jay subdivision entrance is proposed. Photo by Roger Gray

He also acknowledges that “the property contains one significant natural community, Pine-Northern Hardwood Forest. Pine-Northern Hardwood Forest within the property boundary is considered a high quality occurrence of an uncommon community type, and occurs in two separate areas. The forests are very large, moderately diverse communities with relatively large, intact, putative old growth cores, in a moderately intact landscape…the club house, road segments, and houses would be located in the north central portion…construction of these projects would require 4.4 acres of tree removal.”

The applicant says such forest removal would be minor compared with the overall acreage. Clearly, he is not familiar yet with the principles of forest fragmentation and ecological impact zones – principles, terms and definitions quite familiar to the APA. The impacts from this and other disturbance are by no means limited to their physical footprint, but extend far beyond that footprint. This has been shown by extensive Adirondack research conducted by Dr. Michale Glennon and Dr. Heidi Kretser since circa 2006.

A few years ago, Dr. Michael Klemens, a conservation biologist and herpetologist, joined Drs. Glennon, Kretser, and the APA’s own resource experts (wetland biologist Dan Spada, among others) in science-based presentations about the ecological impact zone around the proposed Adirondack Club and Resort subdivision near Tupper Lake. Those ecological impacts, said the APA and external experts, could extend hundreds of meters beyond a given new houselot and road immersed within that Adirondack forest ecosystem. The same principles would apply here in Jay. The impacts from the new roadways and lots, in amount, kinds of use and seasonality of use, will heighten levels of habitat fragmentation at the Jay location.

Dr. Klemens subsequently authored an educational guidebook Pathways to a Connected Adirondack Park – Practical Steps To Better Land Use Decisions. It is available online at adirondackwild.org, and hard copies are also available from Adirondack Wild. In it, Dr. Klemens wrote:

“If a single word can adequately describe the ecological challenges faced by the Adirondack Park that word is fragmentation. Habitat fragmentation is a threat to a region’s ecological continuum which is a measure of its interconnectedness to surrounding areas and its ability to withstand damaging changes, its resiliency.

In the Adirondack Park, human activities are the dominant and primary drivers of habitat fragmentation, creating simplified landscapes that interfere with ecosystem processes, disrupt species movements, and cause the loss of critical habitats. This in turn leads to the loss of ecosystem services that human communities within the Adirondack Park depend upon including clean water, flood control, forest product production as well as diminished outdoor recreational opportunities, especially hunting and fishing.

The disruption of the ecological continuum (i.e., the interconnectedness and its corresponding resiliency) at a scale of thousands upon thousands of acres poses the largest all-encompassing threat to the Adirondack Park…Ecosystems, species, and genetic diversity are not static, and continually evolve in response to change. This is increasingly important in this era of dramatic global climate change as species and ecosystems will have to rearrange themselves upon the landscape, and can only do so in a landscape that is ecologically inter-connected.

Fragmentation is described as an all-encompassing threat precisely because it amplifies the effects of a series of hazards to the ecological continuum, such as the deleterious landscape-scale effects of climate change, the misguided management of recreational access to wilderness areas, the lack of cumulative ecological impact analyses, and the character and placement of development projects, whether a single home or a large scale sub-division.”

Summarizing, Dr. Klemens listed these effects of habitat fragmentation in the Adirondacks and elsewhere:

It does not take a scientist to scrutinize Mr. Stackman’s own composite maps of resources overlain by his development to conclude that this project as proposed will highly fragment a valuable Adirondack upland forest community. None of the ecological impacts of Mr. Stackman’s proposal have been assessed yet. They will have to be if the APA follows its own Large-Scale Subdivision application requirements. According to the APA, the applicant must:

“Submit a to-scale sketch map of the project sponsor’s preferred project design that shows proposed building envelopes, driveways, roads, limits of clearing, and other areas of disturbance, and avoids impacts to any sensitive resources identified through the Resource and Existing Features Mapping and Inventory. The preferred project design should minimize the creation of new areas of disturbance on the project site to the greatest extent practicable, and should concentrate development to the greatest extent practicable.” And, says the APA, the applicant must submit to-scale maps of “the alternatives that may avoid and/or minimize impacts to resources as described in the Agency’s December 23, 2021 Notice.”

As for the proposal’s impacts on the affordability of housing in the Jay-Wilmington-Whiteface Mtn. area, dozens of comments about those likely negative impacts have already been submitted to the Agency by affected community members.

This proposal must be subject to an eventual adjudicatory public hearing because it so easily meets every one of the Agency’s criteria for a hearing. Once again, the public spotlight is shining on the Agency in Ray Brook to perform according to law, regulations and planning for which it is responsible, and to the standards it established in its large-scale subdivision application adopted in 2018.

Image at top: A sketch of the Stackman subdivision, submitted by the applicant