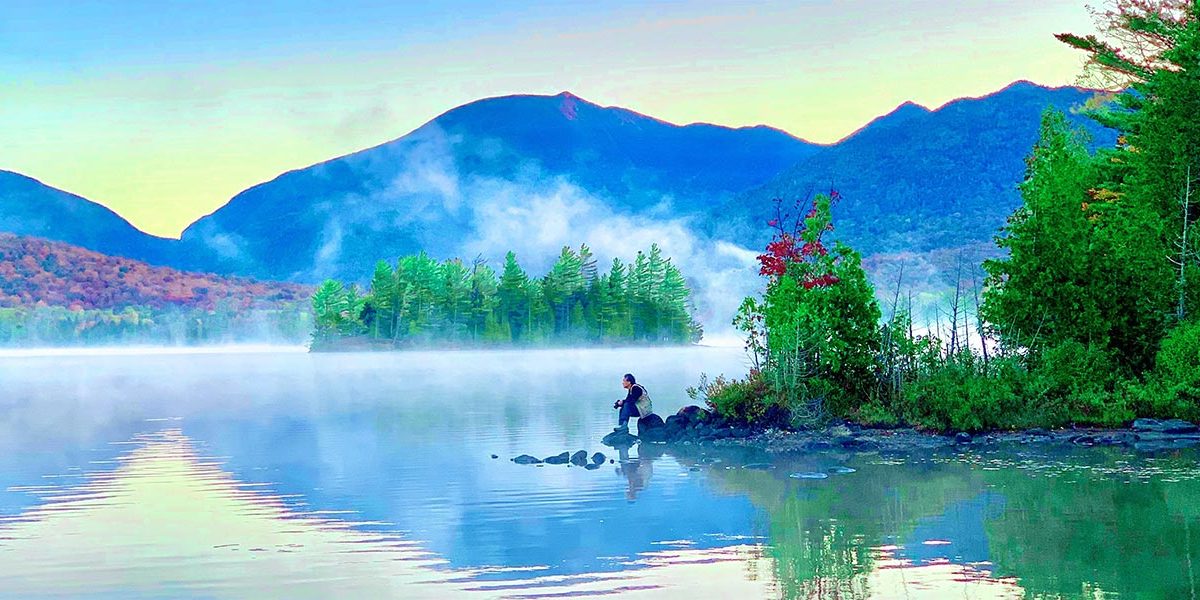 That number jumped to 250,000 acres early in this century as the former pulp and paper companies in the Park, such as International Paper, Champion International and Domtar, all negotiated easements under the state’s program. Lyme Timber acquired many of these eased holdings in the 21st century and is now the largest private forest landowner in the Park.

The Finch, Pruyn Company also sold just under 100,000 acres of private lands under conservation easement in 2007  (plus about 60,000-acres that has become Forest Preserve). The acreage under easement has steadily grown since then. And that doesn’t even count all of the private easements negotiated and acquired by groups such as the Adirondack Nature Conservancy, Adirondack Land Trust, Lake Placid Land Conservancy, Champlain Area Trails, and others.

20th century wilderness coalition leader Paul Schaefer, best known for his wilderness leadership and ardent embrace of the “forever wild” publicly owned Forest Preserve, also believed in private land conservation through agreements of various kinds such as deed covenants or easements. Decades before Finch, Pruyn sold to The Nature Conservancy Paul was urging former Finch, Pruyn president Lyman Beeman and members of the Finch, Pruyn board of directors to consider donating a protective easement on their most spectacular holdings along the Upper Hudson, such as OK Slip Falls. Paul was not averse to private holdings in the Park under active forest management which he viewed as complimentary, both ecologically and aesthetically, to adjacent “forever wild” Forest Preserve.

Until 1984, no statutory tool existed to permit the state to expend public funds and receive specified public rights to private land. Public expenditure for land in the Adirondack and Catskill Parks resulted in the land becoming Forest Preserve throughout most of the 20th century. Conservation easements were only authorized under the common law carried over from the state’s 18th century colonial status.
Under common law, a landowner can grant or sell a scenic conservation easement protecting a piece of property from, say, housing development, only if it is appurtenant or immediately abutting existing protected land, such as adjacent Forest Preserve. An example is the easement agreed to by the Adirondack Mountain Reserve in 1978 allowing public access through this private land to appurtenant Forest Preserve in the High Peaks Wilderness.

The public would not gain a more flexible easement tool until the 1984 easement law, which authorized public expenditure to protect private managed land and gain public rights anywhere, regardless of juxtaposition with Forest Preserve. The 1986 Environmental Quality Bond Act was the first significant funding source for the state’s use of conservation easements under the 1984 law. Its $100 million of land protection funds were commited within four years.

In 1990, Paul Schaefer got behind a proposed 21st Century Environmental Bond Act worth $1.975 billion, endorsed by then Governor Mario Cuomo and approved by the State Legislature. Paul hoped the voters would approve it that fall, in part, to refill the state’s coffers for the purchase of more conservation easements and Forest Preserve. He even created one more organization, one of dozens he created during his lifetime, this one being Sportsmen for the Bond Act. He jawboned many people to support the bond, including me and the organization I worked for (the Association for the Protection of the Adirondacks), but we were easy sells. Others? Not so much. People were worried about the state’s indebtedness. The Bond Act lost at the polls that November by a margin of 52-48 percent.

As Paul Schaefer spoke to me about the need for the 1990 Bond Act he wanted me to know about his involvement with the first conservation easement in the Adirondacks. It came about because of a heated conversation in the very room we were sitting in, he said. After hearing his tale, I immediately spoke what I recalled of it into a tape recorder I kept in my car so I would remember the stories Paul told me.

As Paul recounted, around 1960 (on that evening Paul was uncertain about the precise year) Samuel Bloomingdale of New York City had acquired the awesome scenery of Elk Lake south of the High Peaks from the Finch, Pruyn paper company. Many people were immediately suspicious about his motivation, Paul said. The Northway, I-87, had been authorized by constitutional amendment and was under construction. Presumably, second home lots around Elk Lake – under ten miles from a planned Northway exit – would be worth a lot of money.Some of those worriers gathered with Paul in his home’s Adirondack Room to discuss what to do next. They included Regional Director Bill Petty of the State’s Conservation Department, and the department’s Charlie Matteson, in charge of land acquisition. Also attending that day was Richard Pough, president of the board of the Association for the Protection of the Adirondacks. Dick Pough was also a founder of The Nature Conservancy in the mid-1950s. Paul was a vice president of the Association and knew Dick Pough well.

No longer should our environmental conservation department be enabled to administratively justify ever faster, easier, more mechanized access to the Forest Preserve as widening recreational opportunity. Our far greater and urgent opportunity, one DEC should always embrace, is to pass on millions of acres of wild lands unimpaired to coming generations. No other state has that opportunity. Unlike every other state, New York’s Forest Preserve is not protected by departmental policy governing natural or recreational resources. These lands are uniformly safeguarded by our state’s very constitution for a very diverse public which still appears enthusiastic that these lands be reserved and managed as “forever wild” in the public trust. This fact alone makes these Adirondack and Catskill forests so close to many millions unique and irreplaceable. 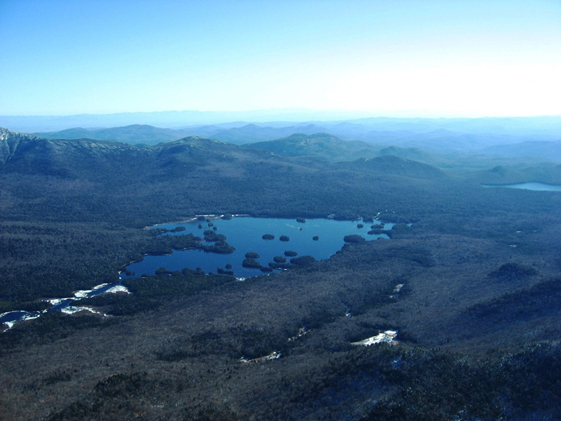 All present in Schaefer’s Adirondack Room gave voice to their suspicions that Bloomingdale would develop his property because its value would skyrocket due to the Northway’s construction. With no positive resolution in sight, Dick Pough asked if the group would accompany him to New York City and communicate their concerns directly to Bloomingdale. Samuel Bloomingdale agreed to the appointment.
In his telling of the New York City meeting, Paul recalled that the Conservation Department’s Matteson came right out with their concerns.

“Level with us,” Matteson asked Bloomingdale. “People around the state are very concerned. What are your future plans for Elk Lake?”

Bloomingdale replied: “Nothing, I love the lake and I want it to stay the way it is.”

Matteson and the rest were floored. One of them haltingly asked Bloomingdale: “would there be a possibility of putting an easement on the property to protect it?”

Matteson then admitted that the State was broke but had “scraped together” $65,000 to protect the Elk Lake shoreline.

Bloomingdale broke off the conversation and privately conversed with his lawyers, then came back to tell the group: “Everything about your plan is great except for one thing: the money.”

Matteson answered gloomily that he thought that would be the problem.

“No,” the owner replied, “I don’t think you should pay us anything. We’ll take $1 for the easement.”

For $1, that original Adirondack easement, acquired under the common law, protected the shoreline and islands of magnificent Elk Lake for more than 50 years until John and Margot Ernst, owners of Elk Lake Lodge, greatly expanded the use of conservation easements here.

The easement prohibits future development but allows for the continued operation of the Elk Lake Lodge and continued forestry on the property. It also makes permanent public trail access through the preserve to the High Peaks and Dix Mountain wilderness areas. A new trail is also planned to the summit of Boreas Mountain from Elk Lake Road.

It’s very exciting and a tremendously generous gift by John and Margot Ernst, Carr said. It’s a gift to the people of the state of New York. When you look at it on a map and you see the context and the continuity across Elk Lake, Boreas Ponds, the High Peaks Wilderness and the AuSable Club to the north, which is under state conservation easement, it’s astonishing what this assembles in terms of conserved acreage.”