Ending the Campfire Prohibition on the Chain Lakes Makes No Sense 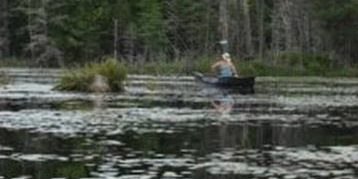 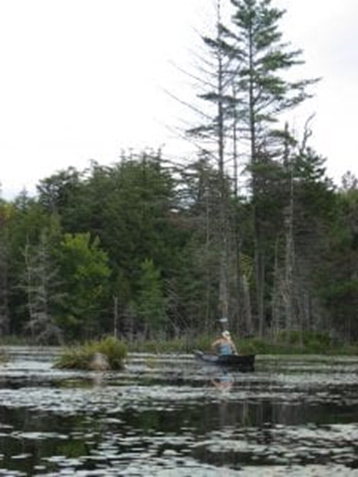 The 19,000-acre Essex Chain of Lakes between Indian Lake and Newcomb certainly has received lots of public attention. In 2007, it was a major part of the Finch, Pruyn and Company sale of 161,000-acres to the Adirondack Nature Conservancy, with help from the Open Space Institute.

Today, the first amendment to the Essex Chain of Lakes Primitive Area Unit Management Plan is up for public comment. Should it be approved? Before tackling that question, let us review.
What an earthquake the 2007 Finch, Pruyn sale felt like, with many aftershocks. It promised an exciting time for land conservation and for advocates for open space conservation like me and the nonprofits I worked with. It still is. It was a scary time for Finch employees, contractors, leaseholders, and many townspeople, including guides tied closely to the land and its future uses. The consequences of that land sale are still playing out and will continue to.

Also, it was a time to recall a longer continuum of debate about the Adirondack Park and what the Park should be and look like. During the 1950s people like my wilderness mentor Paul Schaefer had passionate exchanges with people like Lyman Beeman, then chairman of Finch, Pruyn, about the future of Finch’s vast Adirondack holdings, about the practice of forestry, about wilderness, what was it and whether wilderness management of the Forest Preserve was desirable, achievable, worthy.

Paul Schaefer died in 1996. Even in his final year, he was still researching and speaking with Bob Flacke of Finch, Pruyn’s board (now also deceased) about how some of the Finch, Pruyn lands could be protected from development and eventually added to the Forest Preserve. In 2007, Paul’s goal was amply fulfilled.  In 2009 more than 90,000 acres of the 161,000 was sold with a conservation easement that prevented second home development but allowed continued forest harvesting and management, still ongoing. In 2012, Governor Cuomo and his DEC began to acquire on our behalf 65,000-acres for the Forest Preserve, where forest harvesting is prohibited by the NYS Constitution’s Article XIV. The Essex Chain of Lakes were among those first acquisitions.

Considering the miles of former logging roads, the history of mechanized uses, and the history of float plane landings on certain of the lakes, DEC initially proposed a Wild Forest classification for the Essex Chain of Lakes. The public immediately engaged in debate and hearings. Adirondack Wild pushed hard for a Wilderness classification, for good reasons we felt. Certain APA members, notably Dick Booth, and certain APA staff, argued effectively that the rare wetland plants, the extent of those wetlands fringing on the lakes, the 19,000-acres, the remote feel, the exquisite ecological and recreational values all pointed to greater resource protection than Wild Forest would permit.  Ultimately, the classification decision was Primitive to allow the float plane uses to continue yet for most the lakes to be managed as near to Wilderness as possible. A Wild Forest snowmobile corridor would run between the Primitive Hudson River and the Chain Lakes.

Then in 2014-15 came the Essex Chain Unit Management Plan. Further exceptions to wilderness management were made at the insistence of the DEC, with APA members Booth and Lussi dissenting. With support from Governor Cuomo, DEC led APA by the nose to accommodate more recreational uses, such as bicycling. Regardless of how ill-suited these former logging roads, now trails, were for family bike touring an  exception was carved out to authorize bicycling in this one Primitive area (bikes are not authorized in Wilderness, or on non-mechanized trails in all other Primitive areas).

Then, DEC wanted motorized vehicles to maintain those trails for bicycling and that, also, was authorized by Master Plan amendment in what Adirondack Wild and others viewed as an especially egregious violation of the State Land Master Plan.

From our viewpoint, yet even more egregious violations of law by DEC (and APA) were to follow, most prominently by allowing “pre-existing uses” to continue on Forest Preserve, including snowmobile corridors and bridges within Scenic River areas. These were authorized by the UMP and then by DEC permit. We took the agencies to court over the UMP and the permit. Some of those core issues went all the way up to the Court of Appeals. Adirondack Wild and Protect eventually lost that one 4-3 in 2019. 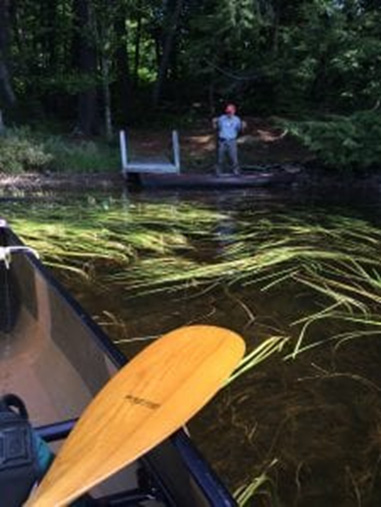 Putting in at Deer Pond, Essex Chain of Lakes

Now in mid-2020, during a pandemic, comes the very first amendment to the Essex Chain of Lakes UMP. What is our DEC now proposing as a change to the UMP and why? In our view, a continuation of the pattern: still more accommodation to recreational uses at the expense of natural resource protection. And what is Adirondack Wild doing? Speaking up for the Essex Chain Lakes UMP that we took to court earlier. Who would have thought it?

The Essex Chain UMP of 2016 may have led to serious violations of the law in our view, but at least the document was thorough and backed by site specific information and data.  This proposed amendment is anything but thorough. It amounts to guesswork. The data and rationale for it are entirely anecdotal, and the DEC admits it.

The proposed 2020 amendment would end the current prohibition of open campfires within 500 feet of the shoreline of the Essex Chain of Lakes, classified Primitive. The DEC’s amendment justifies the proposed action on three grounds: 1. Local community demand for increased visitor use; 2. “it is believed that a portion of the low public use is due to the waterfront campfire prohibition” based upon “anecdotal negative feedback”; 3. “the Adirondack region has relatively little observational data regarding the impacts of campfires on natural resources.”

As to reason # 1, local community demand for increased visitor use is a perfectly legitimate demand so long as it is not the driving force behind this amendment, which it appears to be.

As to reason # 2, the statement that “It is believed that a portion of the low public use is due to the waterfront campfire prohibition” is hardly an actionable basis for campfires which have known negative impacts to the natural resources along these shores, as detailed in the 2016 UMP.

Further, I suspect (and DEC ought to suspect) that a more fundamental reason why visitation has been “below expectations” over the past six years is the long 12-mile, remote drive from State Route 28 N to Deer Pond parking area. Visitor deterrence is largely the result of a long, slow drive on this remote road network.

As to reason # 3, it is contradicted by the UMP itself. The UMP devotes considerable attention on page 3 to the “ecological significance of the Essex Chain shoreline, and the impacts that campfires have on natural resources, especially understory trees and course woody debris removal from firewood gathering.” In fact, the decision to classify the Essex Chain of Lakes as Primitive was due, in part, to the ecological significance of the lakes and their ecologically rare and valuable, fringing wetlands.

DEC adds this additional rationale for the amendment, that “removing the campfire prohibition” around these shorelines “will contribute to simplified management and ease in visitor understanding of the area.” That makes no sense. The public grasps the reasons described in the UMP why campfires along a sensitive lake shoreline are prohibited to protect the soil and vegetation and water quality. Visitors generally understand that the very act of searching for and obtaining firewood or carrying it into a campsite and burning things like trash in it can cause serious environmental damage to sensitive shorelines. They wish to be partners with DEC in protecting these beautiful, vulnerable lakeshores by using a camp stove. 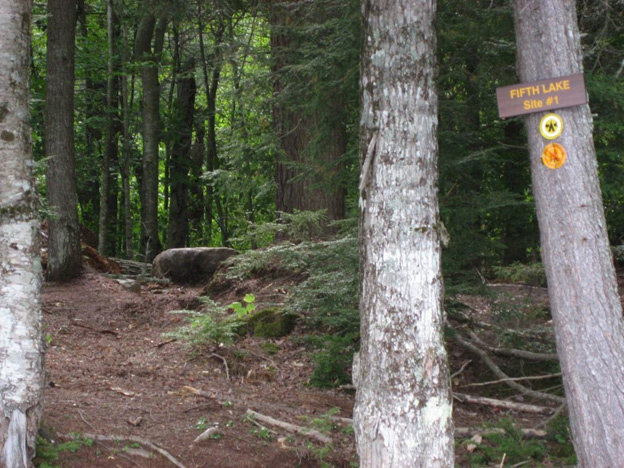 Do Essex Chain Lakes visitors really wish to lug in firewood for over a dozen miles, assure themselves that it is free of any invasive species like the emerald ash borer or, if they’ve forgotten the firewood, scrounge for it at their campsite? Perhaps they would rather spend their limited outdoor experiences de-stressing and exploring.

What Forest Ranger will devote themselves to monitor the dozen or so primitive tent sites for abuses? Who will then clamp down again and prohibit campfires once environmental damage is found?  Remediating damage after-the-fact instead of preventing it strikes me as the opposite of “simplified management.”

Given severe DEC staff shortages, future monitoring and tent site remediation along these shores appears to me overly expensive and unrealistic.  The department’s fundamental legal responsibility here, as elsewhere, is to proactively protect natural resources. In the 2016 UMP DEC presents documented evidence of the actual damage caused by firewood gathering at primitive tent sites elsewhere in the Adirondack Forest Preserve.  That evidence led to the campfire prohibition.  That prohibition ought to remain in place.

The second amendment to the Essex Chain UMP involves the former Gooley Farmhouse site north of Indian Lake and is similarly unsupported by factual data. The 2016 UMP called for that structure to be retained for a range of potential uses even though its perpetuation would be a violation of the “forever wild” provision of our state constitution. Time and neglect caused the structure to fall apart. Now, the amendment calls for its complete removal. In its place DEC is encouraging parking for cars and trucks with space for up to six horse trailers. Horse riding along this Wild Forest corridor is an appropriate and compliant use, but six? That number is unsupported by any analysis of actual or projected use or the ability of that area to withstand such uses. Whatever the precise number it should have a substantive basis. What about other actual or potential uses?  UMP amendments are expected by the Master Plan to include the same detail that a full UMP should contain.  That absence of carrying capacity information for the Outer Gooley Farmhouse area alone should be sufficient to reject the proposed amendment’s recommendation and return it to DEC for additional work.

The mid-August comment period for the draft UMP amendment has passed.  Readers can still find the amendment on the APA website. See Adirondack Wild’s comment letter here letter to DEC and APA. The amendment remains in draft form, so further public comment opportunities are expected to be set by DEC and APA.