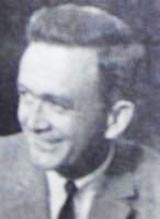 Marking 50 years of Earth Day (1970-2020) should not pass without paying tribute to the late New York State Senator Bernard C. Smith.  The late State Senator and chair of the Senate’s environmental conservation committee combined a strong moral and ethical compass with political talent and negotiating skill to protect and conserve our state’s wild lands, wild rivers and natural resources from 1965-1978. He was a steadfast and very influential Republican proponent for the environment precisely when such a Republican was needed in Albany. He worked his political skills at the State Capitol, but his love for fishing and the outdoors was expressed at his home on Long Island and in the streams and rivers of the Catskills, where he had a camp near the Esopus Creek, and on the upper Hudson River in the Adirondacks.

Here is what I wrote in an Almanack post from 2014:
Bernard C. (Bernie) Smith served in the NYS Senate from 1965-1978, an era when trust in our government’s good will and capability to improve our lives was ebbing fast. But Senator Smith, a Republican, believed strongly in that capability and responsibility.

His belief found expression in numerous laws to protect our environment, laws which had to pass through his Committee on Environmental Conservation.

Some have characterized him as Governor Rockefeller’s strong right arm in getting these laws through the Senate. Perhaps so. But he fought for them because he believed them to be right, because he believed they would improve the lives of New Yorkers as well as the habitats we share with the more than human world.

Senator Smith also meant something to me personally. By then retired from the State Senate, in 1987 he was President of the board of the nonprofit Association for the Protection of the Adirondacks. I was just hired as its first executive director in sixty years.

Early that first winter, I was invited to visit his law office in New York City. The interview did not last long. I asked him for advice on how to get started in my new job. I learned that Senator Smith was not going to be my buddy or micromanage how I spent my time. He said in a gravelly voice: “Find yourself a good guide and get out into the Adirondacks at the earliest opportunity. You have to learn your own way around.” After some small talk and a ‘good luck,’ he smiled very warmly and showed me the door. I left feeling just as much at sea about what to do as when I entered his office. But Senator Smith was exactly right; I did have to find my own way. He knew there were the many people who would offer me excellent guidance. I eventually found them, and I was off and running.

Bernard C. Smith was a rural American, hardworking, the son of a Pennsylvania coal miner, and a passionate hunter and angler. Maurice Carroll, a reporter from The New York Times, provided this snapshot of Senator Smith in the July 6, 1975 edition:

“‘It’s one of my biggest frustrations,’ the Northport Republican said the other day, glancing about his paneled suite in the Legislative Office Building. ‘I could hunt and fish every day of my life.’
During his ten-year span here, his bills have helped protect the Adirondacks from being marred by haphazard development, vastly increased the powers of the state environmental commissioner and now, potentially, might end his own Long Island’s exemption from some supervision by state conservation authorities.
Back home in Barnesboro, Pennsylvania, a hamlet in the western mountains where he was born, his coal miner father educated him in outdoorsmanship and decades before the term became fashionable, Mr. Smith remembers, he talked in terms of the environment.”

In 1936, Senator Smith’s father died in a mining accident and the Smith family promptly moved to Northport, L.I., where the Senator’s mother had a sister…The G.I. Bill helped him through Cornell Law School and his desire to be a criminal lawyer helped get him into Republican politics. ‘The only way to get experience was in the D.A.’s office, and the only way to get into the district attorney’s office was to start with political clubwork.’

He finally became the Suffolk County district attorney, decided to move out into the Legislature in 1965 and got the Republican nomination by threatening to run in a primary if he was not selected. He has been here since.

When he has time, Senator Smith duplicates his vicarious indulgence in outdoor living that he achieves by his Senate work, at camps he owns on the upper Hudson and on the Esopus River in the Catskills. ‘Last Thursday, I slipped off and fished there,’ he said.

Protecting such spots elsewhere in the state took up much of the Senator’s time last month as he fought some of his fellow Republicans to win Senate approval, 35-21, of a 1,000 mile extension of the state’s ‘wild rivers,’ stretches of water that are protected against encroachment. This movement, which commenced with protection in the vast Adirondack Park area a few years ago, has been battled both by Adirondack residents and their representatives and by Conservatives who protest what they say are invasions of home rule and property rights. How has he contrived to press environmental legislation through a Legislature that, until this year, has been Republican dominated? ‘It’s just a matter of persistent action,’ Mr. Smith said.”

Being a “persistent” legislative actor for the environment in the 60s and 70s, often against the grain of his own Senate majority, took its political toll. But Senator Smith had a lot to offer the world after his retirement from the State Senate. One of the organizations he had come to know in the Legislature was the Association for the Protection of the Adirondacks, whose president and chairman Arthur Crocker and vice president Paul Schaefer were among those who had promoted and influenced the APA, DEC and Wild and Scenic Rivers bills. In 1982, Senator Smith accepted the board presidency of the Association, where he must have felt in the mainstream among fellow Rockefeller Republicans, fiscally conservative but espousing strong governmental action for the environment and wilderness.

Bernie Smith was of the legislature, used to tough negotiation and observant and respectful of legislative give and take and prerogatives. Arthur Crocker, in contrast, was more patrician in attitude and in his upbringing, temperament and training impatient with the legislative process. There was this tension in the way the two leaders approached common problems. Paul Schaefer, who like Bernie Smith had a hardscrabble beginning in life, knew and respected both men and yet injected his own unique approach, seasoned by his personal knowledge in the field, to gaining protection for the wilderness and wild rivers.

It is remarkable that these three quite different individuals worked so well together for so long. Mutual respect was part of the reason. Loyalty to each other and to the larger public interest was another strong bond of their generation.

In 1992, Bernie Smith accepted his party’s nomination for State Attorney General despite the exceptionally long odds at winning against Attorney General Robert Abrams. Despite injuries incurred in a fall, Bernie waged a losing but respectable campaign. In the fall of 1993, Senator Smith, then sick with cancer, mustered a terrific effort, traveling many hours to Keene Valley to attend his final conference of the Association for the Protection of the Adirondacks. He stayed largely in his room, as old friends came to see him. Paul Schaefer was one of those. Weeks later, his sons took him to their Catskill camp where he must have heard the Esopus river murmuring or roaring nearby before he died at the age of 70.

Generations owe Bernard C. Smith a debt of gratitude for his persistent actions in the public interest on behalf of New York’s environment, and for showing us that for such actions to be effective and lasting, they must be bipartisan. 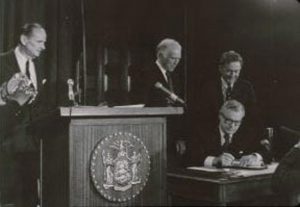