Expanding the Reach of Forever Wild 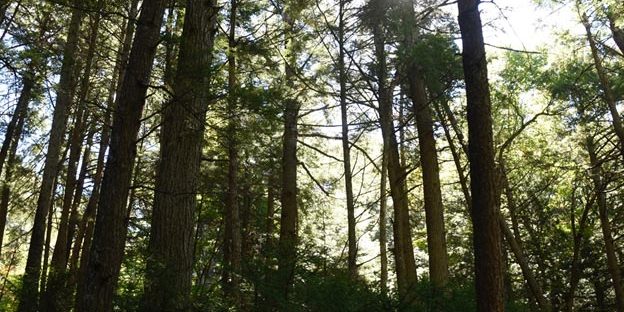 Expanding The Reach Of Forever Wild

As my friend and I hiked underneath groves of large eastern hemlock trees in the part of the Adirondack Forest Preserve called Wilcox Lake Wild Forest, we thought again about what this forest is, and the vast ecological system that it represents. What towered above us, hemlocks over a century in age, are dwarfed in scope by the vaster yet unseen root and fungal synapses and microbiota that sustain this wild forest beneath our feet.

The watershed feeding Tenant Creek flowing beneath the trail we were on is one of thousands upon thousands of watersheds, large and smaller, whose ability to store and slowly release water were once under threat by deforestation and which motivated passage in 1894 of New York’s “forever wild” provision in its State Constitution, now encompassing 3 million acres in both Adirondack and Catskill Parks. Wilcox Lake Wild Forest, more than 100,000 acres in size, is part of that forever wild system.

And these Adirondack forests, stitched together with conserved or well safeguarded private lands, are central to maintaining a livable part of our planet, its human, plant and animal life support systems, the region’s ecological fabric, and the very basis for its economic advantage.

These forests are the lungs of New York, but also of the northeastern U.S., sequestering and storing carbon on a large scale. They are part of a huge web of life, seen and mostly unseen.

For instance, ecologist and botanist Jerry Jenkins estimated in his book Climate Change in the Adirondacks (2010) that the carbon bank in all Adirondack forests, above ground in the vegetation itself and below ground in the soil, is about 85 tons per acre, or over 430 million tons in all. As Jenkins writes in his book Climate Change, if all that stored forest carbon were to be released at once it would be equal to all the carbon emissions from within the Adirondack Park over the past 750 years.

Such carbon storage and offsetting in the Adirondacks and Catskills receives surprisingly little mention from New York State government. When New York State acquires Forest Preserve or conservation easements on private land or State Forests, the carbon benefits are rarely if ever cited in the press release – much less estimated as one of the many benefits of acquiring these lands or conservation rights.

Yet it is these very management plans which are meant to translate “forever wild” policies into practical reality on the ground. Many are hopeful that the 2019 legislation, the Climate Mitigation and Community Protection Act, will expect DEC to specifically strengthen its plans, policies and economic incentives to expand carbon sequestration and storage on public and private forests across the entire state.

That view of Article XIV as a climate tool would also imply that DEC expand its entire vision of the constitution, looking beyond its perceived irksome prohibitions and focusing more on its promise and benefits.

Article XIV is our state’s highest (and mandated) expression of the land ethic in practice – and how often does our DEC ask the public to practice “leave no trace” recreational pursuit, or “if you care, leave them there” when it comes to young wildlife, or “Carry it In, Carry it Out” when it comes to removing personal belongings on public land?

Article XIV, “forever wild,” is the ultimate expression of exercising human restraint to benefit the environment. DEC could be making much better use of it, from just about every standpoint, in just about every division and bureau.

Instead, many at DEC and its pre-1970 predecessor (the Conservation Department) have viewed Article XIV suspiciously and narrowly, as something prohibitive (as in material tree cutting), an irritating obstacle to administrative plans or whims waiting to entrap the department legally.

Alternatively, DEC and the Adirondack Park Agency could embrace and promote Article XIV as a modern and crucial aide to their success on multiple, urgent environmental fronts all at once – air and water quality, climate mitigation, stream and river restoration, wetlands protection, wildlife conservation, climate planning and mitigation and public safety – the list of how Article XIV can be embraced to strengthen all DEC’s, and APA’s legislated responsibilities is lengthy.

Also, Article XIV in our very constitution should rally the Governor and all state agencies to reach for and achieve more consistent, better coordinated environmental policies toward the entire Adirondack and Catskill Parks. As the public knows, the Forest Preserve in both Adirondack and Catskill Parks is administered, often in conflicting ways, by four different DEC regional offices and as many offices of the NYS DOT and Health Departments. This could change if a determined Governor and Commissioner viewed Article XIV through a more positive lens.

As our hike progressed, my friend and I mentioned the recent Court of Appeals decision affirming Article XIV. In May, our highest court (Protect the Adirondacks! v. DEC et. al.) ruled that the state’s construction of 27 miles of snowmobile community connector trails across multiple units of Forest Preserve, the resulting alteration of the Forest Preserve (primarily for mechanized uses) and the loss of many thousands of trees due to the construction required an amendment of Article XIV – and could not be authorized by administrative fiat, as DEC had done from 2011-2014.

The decision echoed and affirmed that of the same Court in 1930 (in the Bobsled decision, North Elba). Ever since the Court’s decision most of the public’s attention has been drawn to only one clause of Article XIV, the part that states “nor shall the timber thereon be sold, removed or destroyed.” The Court did rule that as many as 27,000 trees of one inch or larger subject to destruction to build the connector trails violated Article XIV. Some trail organizations worry that the Court’s adoption of a more expansive tree-cutting standard has prohibited all or most trail maintenance projects – which is not true.

My larger point is that reducing Article XIV simply to a prohibition on tree cutting beyond a material degree is not what the Article XIV 1894 framers, 20th century defenders, or this 2021 Court intends.

During the case’s oral argument last March, one Court of Appeals justice reminded his colleagues that the Forest Preserve is a “unique gift.” So many forests around the world were on fire, he said, a frightening conflagration accelerated by dramatic climate change. In the eastern United States, “we rely on the Forest Preserve,” he said, for climate mitigation, watershed protection, wildlife conservation, in fact for the very quality of our lives and to maintain all forms of life, our community of life relatively intact. That, he maintained, was the vital importance of Article XIV.

Nicholas A. Robinson, Distinguished Professor of Environmental Law at Pace University School of Law, and a former deputy commissioner of the DEC said it all best in his 2007 paper “Forever Wild”: New York’s Constitutional Mandates to Enhance the Forest Preserve. In his paper, Robinson writes:

“We need to expand the reach of the “forever wild” clause throughout the Adirondacks if the people and nature of this region are to prosper in the future. New York’s “forever wild” Forest Preserve has been far too neglected at home, while serving as a model for wilderness laws nationally and internationally. In the coming decades it must be embraced again at home, once again to be a model for the changes that humans will need to find as we adapt to climate change all over the Earth. We must build nature’s systems into our own social and economic lives if we and nature are to endure in the future as we have in the past.

My thesis is that the executive branch of State government, our Governors and most of our other State and local authorities have observed the mandates of Article XIV most shallowly. They have ignored their stewardship duties to promote “forever wild forest lands.” Civic groups, and courts should not only concern themselves with the task of keeping government from evading the land ethic; rather we should be changing government to embrace the land ethic derived from this “forever wild,” both in the Adirondacks and Catskills, and as a role model throughout the State and nation.”