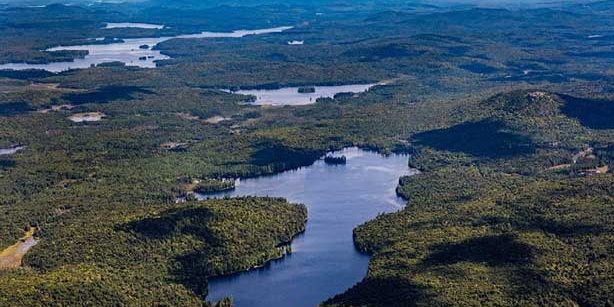 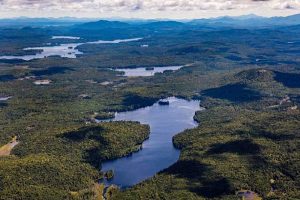 Salmon Lake in the foreground with Rock Lake and Little Tupper Lake in the background. Picture by Nancie Battaglia/Almanack file photo

News on May 29 comes from the Times Union’s journalist Wendy Liberatore that the late Marylou Whitney’s husband John Hendrickson plans to apply for an 11-lot subdivision of Whitney Industries land in Long Lake.

Unable to sell the 36,000-acres in one fell swoop, Hendrickson tells the TU journalist that he will change the name to Whitney Real Estate and try for a permit allowing one private, two-three-thousand-acre estate on each of 11 lakes, leaving him, he estimates, with $238 million. Such sales would average $6600 per acre. That seems a bit high, but he’ll have the chance to find out.

Whitney Industries, Inc. has for many years enjoyed a special, favored federal corporate tax status. It is a subchapter S corporation which, in essence, gives Mr. Hendrickson limited options for making money on the land. Selling real estate has always been one of those few options, something he says to the TU journalist that he is now forced to do. That priority, of course, conflicts with the land’s longstanding state Forest Tax Law status which offered tax exemptions in exchange for keeping the land in forest and for forestry.

That property tax abatement has saved Whitney’s owners many a local property tax dollar over the decades. Since 1997 local taxing districts have benefited because 15,000 acres went from Whitney Industries into the NYS Forest Preserve by sale in 1997 for $17 million, or $1,100 per acre, thus making those lands and waters fully taxable for all purposes. Those 15,000 acres are part of the William C. Whitney Wilderness area.

Moreover, under Mr. Hendrickson’s scheme isolated, thousand acre private estates within Whitney holdings will cost a lot of money to upgrade and maintain the miles of dirt access roads and to provide fire and other emergency services for part-time residents and their guests. Possibly, these added costs would exceed any gain in local tax revenue.

Mr. Hendrickson says he is an environmentalist. Good news, that, because he should be interested in what conservation science has discovered in the Adirondacks. Thanks to the research of Adirondack conservation scientists like Dr. Michale Glennon and Dr. Heidi Kretser, among others, we have learned a lot about the ecological impact zone around a single house and associated outbuildings, driveways, and access roads plopped down within an Adirondack forest.

Their research, published and entered into public hearing records since 2011, has shown that in an undeveloped Adirondack forest the ecological impact of new development extends hundreds of meters beyond the footprint of the new road, driveway, and structures. An acre of newly developed land at a place like Whitney Park could have an ecological impact of up to fifteen or even more acres surrounding the house/driveway/outbuilding footprint. That is just for one house. So, the spatial design of Mr. Hendrickson’s scheme is as important, if not more so, than the number of principal buildings.
While most of Whitney lands have been intensively cut over from 1899 to 1999, the extensive tree harvesting largely ended by 2000 and in no way alters the ecological potential and connectivity of the property. The 36,000-acres of Whitney private ownership is still forested land heavily intertwined with 22 ponds, numerous permanent and intermittent streams, coniferous swamps, shrub swamps, emergent marshes, and wet meadows.

All those water resources and wetlands, because they are so intact and so ecologically interconnected, contribute to Whitney’s high priority listing in the state’s Open Space Conservation Plan. Whitney has remained on that high priority list since 1992.

The entire acreage is in Resource Management where the legal priority is to “protect the delicate physical and biological resources…and preserve the open spaces that are essential and basic to the unique character of the park.”

APA reinterpreted the priorities for Resource Management during the 2012 Adirondack Club and Resort permit, allowing 80 residences in RM by essentially ignoring some key testimony of its own staff and that from outside experts about the ecological impact zones, and the need to overlap them. Can APA similarly ignore the conservation science and prioritize residential construction at iconic, intact, historic Whitney Park, a priority on the statewide open space plan, called by students of the tract a “cradle of American forestry”?

Applying the average overall intensity guidelines on 36,000-acres in RM, there is the theoretical potential for Mr. Hendrickson to apply for 843 principal buildings. All conservation science aside, the clientele he hopes to attract would not wish 800 other folks, families, guests, and renters living around the next bay of the lake or bend in the road. Hendrickson tells the TU reporter that he will apply for a permit for just 11 “principal buildings.” Lots of privacy there, and what could be the ecological harm of just 11 lots on 36,000 acres? It could be plenty.

In the early 1990s, Whitney Industries sought 40 new, large residences around Little Tupper Lake, all in RM. The Adirondack Park Agency staff at that time advised the potential applicant that scope of development in that location would not be approved. Perhaps the Whitneys were angling for a land sale to NYS.  Remember that Subchapter S federal tax status. Regardless, after negotiation with APA the applicant was ultimately granted Agency permit 91-53 authorizing three lots and the construction of seven single family dwellings on those lots on Little Tupper Lake. A condition of that permit reserved the right of the agency to require a master plan prior to approving future jurisdictional activities. A few hunting and fishing cabins, as defined in the regulations, were exempted from that condition but never built.

In a subsequent permit (1996, Permit 96-138), APA authorized subdivision of 3 of the lots permitted to be built upon in 1992 on Little Tupper Lake: Camp Bliss, Camp Francis, and Camp on the Point lot. All 3 were deed restricted to prevent further development or subdivision. Whitney pledged no plans to further subdivide. 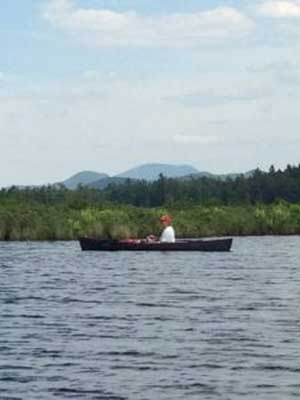 The APA’s permit went to some length to describe why no more subdivision would be important. APA Permit 96-138 issued to Whitney Industries on August 14, 1996 states:

“With numerous lakes, ponds, streams, and extensive wetlands, it represents a significant open space and ecological resource of the Adirondack Park. Nowhere in the eastern United States do land resources exist in private holdings of comparable size and extent with the exception of Northern Maine. The open space and ecological values of properties of this size and containing these resources diminish rapidly as they are subdivided.”

Under Findings of Facts for Open Space, Visual and Aesthetic Resources the permit notes that the subdivision is clustered in that the lots to be conveyed are located in the northern end of the project site “with the remainder dedicated to open space, wildlife habitat, watershed, forestry, hunting and recreation and other open space values.”

Under Forest Resources, the permit states: “A traditional grid subdivision of the property would reduce its future timber potential because segmented ownership would inhibit integrated comprehensive timber management for the entire project site.  The best way to utilize the forest resource and at the same time protect its wildlife and open space values and the water quality of waterbodies and streams on the site is to maintain it in a relatively unsegmented ownership.”

Permit condition 14 restates the 1992 condition: “The Agency reserves the right to require submission of a comprehensive master plan for its review and approval prior to approving any future jurisdictional activities on the project site, whether proposed by the applicant or its successors. The plan shall contain sufficient detail to allow the Agency to assess the impacts of all new land use development and subdivision.”
– APA Permit 96-138

What will be the quality, the detail and the comprehensiveness of a 2021 Whitney master plan that will be considered sufficient by today’s rudderless APA?

The APA acted in 1992 and 1996 to ensure that Resource Management land at Whitney was protected and largely set aside to achieve the APA’s statutory purposes. Will today’s APA act similarly with Mr. Hendrickson and actually honor the Resource Management definition and guidelines? Its decisions since 2012 strongly suggest it may not. Therefore, the new legislation, A. 4074/S.1145, which specifies the conservation design steps APA and large subdividers must take together on a pre-application basis is all the more urgently required. That legislation was the subject of intense negotiation and compromise among stakeholders at town hall meetings in 2017 – 2018.