From Perkins Clearing to Cathead Mountain 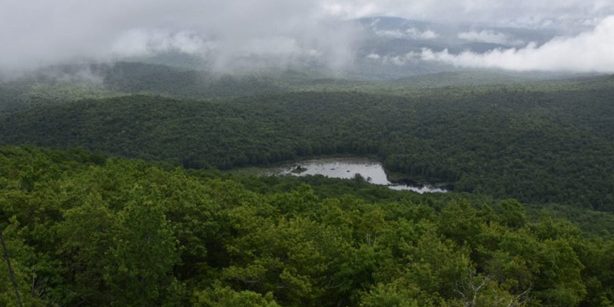 From Perkins Clearing To Cathead Mountain 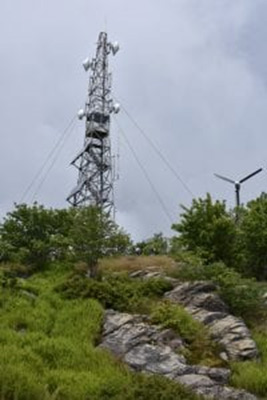 I was hiking in Hamilton County recently when one of my companions spoke of the days of the Perkins Clearing land exchange (1979), a publicly supported amendment to Article 14 of the NYS Constitution which led to a significant land exchange between the State of New York and International Paper Corporation north of the village of Speculator.

We spoke of that land exchange as not only highly sensible and pragmatic for both sides, but also a classic Adirondack “win: win” result for the public’s Forest Preserve and for private forest industry.

The Vote in 1979: It was only after I got home from the hike that I found out that the public vote whether to authorize this land exchange was remarkably close – 50.7% for the exchange, 49.3% opposed. Over 1.1 million voters that year were not persuaded this was a win: win scenario.

While the Association for the Protection of the Adirondacks, Adirondack Council and Adirondack Mountain Club urged the measure’s passage, the Sierra Club urged its defeat.  Perhaps many of the “no” votes were opposed to amending Article 14 – on principal. Perhaps it was felt the amendment was a boon or gift to private forest industry that was cutting down trees for fiber in the Adirondacks. Perhaps it was simply a lack of trust in the process needed to amend the State Constitution. Erosion of public trust in our public institutions had been fading for years before that.

I was not a NYS resident then, so I am merely guessing about possible reasons this 1979 vote was so close. But New Yorkers did decide, by slim margins, “yes.”

The Aftermath: Today, it is apparent that the Perkins Clearing amendment was sensible and highly beneficial. Important public benefits and broad community needs for the public and private Adirondack sectors were achieved that could not have been obtained in any other way but through a constitutional amendment. The net benefit to the Adirondack Forest Preserve has been positive.

The fact of the land swap’s authorization by the voters led to several years of ensuing controversy over how the consolidated Forest Preserve lands adjacent to the West Canada Lake Wilderness would be classified by the Adirondack Park Agency.

Passions ran hot in 1983-84 over the Perkins Clearing land classification decision in Ray Brook, much as they did over the Essex Chain of Lakes and Boreas Ponds more than thirty years later. Some sporting interests from Hamilton County and across New York wanted more motorized access. Forever Wild advocates were strongly in favor of it all being included within the West Canada Wilderness, and there were many shades of gray.

Compromise over the land’s classification was reached. Most of the Forest Preserve acreage obtained in the exchange was classified Wilderness, about 2800 acres classified Wild Forest on and surrounding Pillsbury Mountain, and motorized access on the roads terminated there, not extended to Cedar Lake – as many desired. Today, Lyme Timber manages the forestry and recreation on the consolidated former IP tract, now covered by a conservation easement. DEC has yet to advance a Draft West Canada Lakes Wilderness Unit Management Plan, which is vitally important work to do so that all management activities are conducted in a coordinated way consistent with Wilderness guidelines. A lot of potential exists for new recreational opportunities and linkages to Speculator that do not interfere with Lyme’s forest management and the terms of the easement.

In summary, many years ago New York’s voters supported a complicated Adirondack land swap in Hamilton County that has had, overall, positive benefits for the public and private partnerships of the Adirondack Park – and with potential for many more recreational, business and climate-related benefits to come. 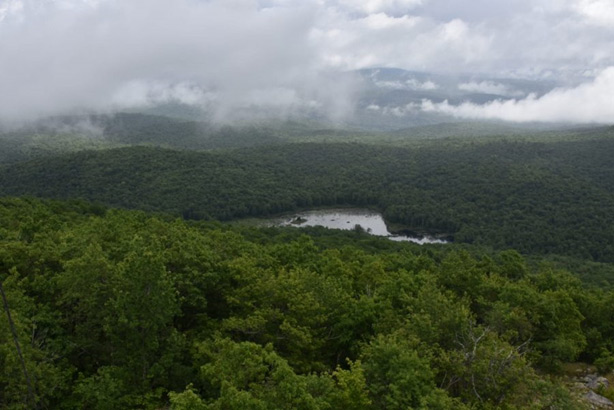 View from Cathead Mountain during a visit with the private landowner. Photo by Dave Gibson

Another Potential Win: Win : Today, there is another land swap in the southern portion of Hamilton County with the same potential to be welcomed by future generations. This potential land swap is also a complicated. The voters may or may not give their ultimate blessing. But, like Perkins Clearing the problems and potential benefits are significant and the only viable solution is through a land swap amendment to Article 14.

Cathead Mountain: Cathead Mountain in the Town of Benson is split between private and public ownership. On three sides, the mountain is surrounded by Silver Lake Wilderness. The summit is private where the old firetower is strung with wires and a microwave dish. From there, weak, unreliable signals are directed into the Rt. 30 valley communities of Benson, Hope and Wells. State Police and County Sheriff attest to gaps in communication resulting from such an outdated system powered by propane tanks, old solar panels, and a small wind turbine. State Police helicopter landings on Cathead’s summit are necessary to resupply the propane tanks. These flights are dangerous, noisy, and out of place in the Wilderness just beyond the summit. Meanwhile, accidents or fires down in the valley may receive slow or no emergency response.

Hamilton County’s studies have convinced Adirondack Wild that only a constitutional land exchange can solve the pressing public safety problems while providing benefits for the Forest Preserve and Cathead Mountain. Specific in purpose and narrow in scope, this land exchange could serve a well-documented, pressing need for reliable emergency communication.  Through the exchange, about 480 acres of the private ownership would greatly expand and round out the Forest Preserve’s Silver Lake Wilderness at this location. In addition, a conservation easement on Cathead’s summit could restore public recreational access to magnificent mountain views in all directions, while all the equipment cluttering the summit would be removed and moved to a more reliable location. Currently, public access to Cathead’s private summit is not permitted.

In exchange, 46 acres along a half-mile of Forest Preserve below the mountain could allow grid power to reach the new microwave tower on private land. That reliable power source could lead to far more reliable emergency communications for people down in the valley and at the same time provide the private owner with motorized access to their property. For decades, the private owners have had to bring their supplies in on foot or horse and wagon.  The entire private property could be conserved through a conservation easement.

The net benefit in terms of acreage exchanged could be about 10:1 in favor of the Adirondack Forest Preserve, in addition to the conservation easement protecting Cathead Mountain summit and the entire private property. A right of first refusal could be granted the state should the private owner ever desire to sell.

As at Perkins Clearing, here lies potential to achieve a pragmatic, mutually beneficial solution for the Forest Preserve, the adjacent private owner and, in this instance, emergency service providers and the many people they serve, both residents and visitors, in southern Hamilton County. In the decades to come, with support from all environmental groups, from lawmakers in Albany and from the voters, it might be hailed as a classic win: win for the Adirondack Park. Right now, I cannot think of a more important public-private initiative to advance than this one at Cathead Mountain.

(References relied upon for this post include Land Acquisition for New York State: An Historical Perspective by Norman J. VanValkenburgh; Forever Wild: A Cultural History of Wilderness in the Adirondacks by Philip G. Terrie; and Perspectives on the Adirondacks: A Thirty-Year Struggle by People Protecting their Treasure by Barbara McMartin)