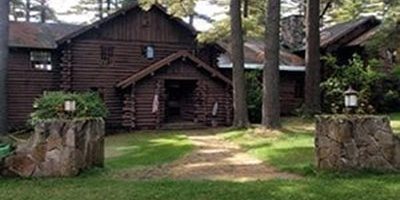 Historic and forest preservationists are at odds about the future of Debar Lodge, but formerly they joined hands. In 1983 their collaboration saved historic buildings at Camp Sagamore while expanding adjacent Forest Preserve by amendment of Article XIV of the NYS Constitution and saved the structures at Camp Santanoni by legislation. Both are designated National Landmarks.

Also, conservation easements have allowed structures in the Adirondacks to be maintained if negotiated before the land is purchased as “forever wild” Forest Preserve. Examples include the lighthouse at Valcour Island and the firetower atop Mt. Adams.

Unfortunately, no historic interest with needed financial backing stepped forward to accept an easement at Debar Lodge. The legislative route is also closed. Today the only way to preserve the Lodge on its current location is to approve an amendment to Article XIV, Section 1 of the NYS Constitution that authorizes private parties to undertake the Lodge’s preservation.

Designed by the noted architect William Distin, the 80-year Lodge fits beautifully within its environment. It has been surrounded by the forever wild Forest Preserve since 1979. The land was acquired for the public, but the difficulty arose when the structures were leased to a private party for 25 years. That private reservation ended in 2004 when the Lodge reverted to full public ownership as part of the Forest Preserve.

Up to 2004, an arrangement might have been struck with historic preservationists to keep the Lodge out of the Forest Preserve and to maintain it through a conservation easement. While efforts were made, they were not successful. After 2004 DEC knew that Article XIV of the New York State Constitution and the Master Plan required the structure’s removal. More time passed. Maintenance and tough decisions were deferred.

Like Debar Lodge, permanent retention of Santanoni’s structures on Forest Preserve was also impermissible. However, interests in historic preservation were rising in the early 1980s. Similar tensions to those existing today flared then.

In 1982, Assemblyman Maurice Hinchey introduced his bill to address Santanoni and put an end to the state’s acquisition of land containing historic structures. His legislation, today’s Environmental Conservation Law 9-0109, mandates that pre-existing structures on lands acquired for the Forest Preserve can remain only if all three of these criteria are met:

The land and structure were acquired by the state prior to 1983 and the structure was built prior to the date of state acquisition.
The structure is listed on or deemed eligible (by the state parks commissioner) for the state Register of Historic Places.
The state environmental conservation commissioner finds that the structure can be maintained for the public’s understanding and enjoyment of the Forest Preserve or for DEC administrative activities necessary for the protection of the Forest Preserve lands.
The Hinchey bill violates the Constitution, as Article XIV says the lands of the state are to be forever kept as wild forest lands. No legislation can override the Constitution. The bill also violates the Master Plan’s guidelines. However, it has never been litigated. Hinchey’s intent was to limit the constitutional impact of his bill by drawing the line at Santanoni and to prevent debates about the future of other buildings deemed “historic” on the Preserve. Santanoni and Sagamore have also been blessed with committed people and private resources.

Debar Lodge meets the second test in Hinchey’s law. It is eligible for listing on the Register, but it fails the first and third tests of ECL 9-0109. The land was acquired in 1979, but the structure itself, built in 1939, was reserved to a private party until 2004, long after enactment of the 1983 statute. Also, the DEC commissioner has never issued a finding that the structure can be maintained for the purposes described in the law.

To conclude, DEC must honor Art. XIV and the State Land Master Plan which has the force of law. Only a constitutional amendment and sufficient private resources can preserve Debar Lodge where it is.