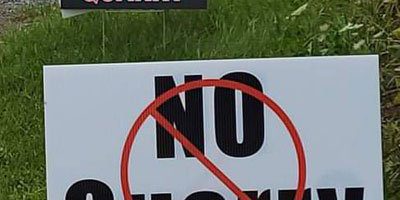 The legal challenge was filed this spring because the Adirondack Park Agency in Ray Brook failed to conduct an adjudicatory public hearing that could have, through sworn expert testimony and cross examination, uncovered facts about noise, ground, surface water and other information needed for the APA to render a determination of no undue adverse impact “upon the natural, scenic, aesthetic, ecological, wildlife, historic, recreational or open space resources of the park.”

No hearing about the granite quarry was held by the APA which, after staff review, issued the proposed granite quarry a permit to operate earlier this year.

The reporter’s article quoted the judge and the legal counsel for the APA during the Supreme Court proceeding. Assuming those quotes are accurate, they deserve some critical commentary.

The judge is quoted as saying that “adjudicatory hearings are reserved for when significant legal issues are skimmed over or not thoroughly explored during the permitting process.” With all due respect to the judge, as quoted this is not an accurate or legal criteria for holding a formal hearing by the APA.

Adjudicatory hearings are not “reserved for when significant issues are skimmed over or not thoroughly explored during the permit process.” Not at all, in fact.  There is no language in the APA’s law or regulations that speaks to “skimming over” things during a permit process that would then lead to a hearing.

The Judge in this case should become familiar with the criteria and manner in which the APA conducts formal hearings on a project. They take up 12 pages, an entire section (Part 580), of the APA’s book of rules and regulations that have been in place, with minor amendments, for the past fifty years.

In my more than 30 years of observing the APA, formal hearings were once fairly commonplace. The APA’s regulations about hearings have not changed at all. What has changed is the APA.

Far from being rare occurrences, formal hearings were anticipated in APA law, rule and regulation whenever they were deemed helpful in rendering difficult permit decisions. In fact, APA can never deny a permit without holding a formal hearing.

For decades past, formal hearings were an annual affair. Sometimes several were convened in a given year whenever the Agency staff and members felt that the size or complexity of a particular project demanded one and when the amount and quality of information resulting from a hearing would help APA make its final determination of project approval, project denial or project approval with substantial conditions.

I recall formal hearings about tall communication towers on ridgelines, about herbicide applications on Adirondack lakes, about complex mining projects, about large residential subdivisions. My organizations became parties to some of these. Here is my memory of the process. First, APA staff would recommend holding a formal hearing based on adopted regulatory criteria (see below). APA staff recommendation was approved by the APA board. Formal notice was then given to the applicant and to all potential parties. Dates for sending notice are clear and unequivocal in the regulations. I or my group sought to become a party to an APA formal hearing by petitioning the agency with a letter demonstrating the capacity to participate and to supply information or expertise relative to the project. A hearing officer was assigned to set the hearing rules and schedule, take expert witness testimony, subject that testimony to cross-examination, admit or exclude evidence based on known rules of evidence, and generally conduct the hearing fairly and without prejudice.

Some of these formal hearings took a week. Some took a month. A few took several months to complete.

Why were formal APA hearings commonly held from 1973 until 2011? For the fundamental purpose of creating a formal record of project information needed by the APA to render a final decision whether or not the permit application would create an undue adverse impact upon the Park’s resources. No formal hearing has been held by the APA since 2011. And the APA seems determined not to hold another.

APA Legal Counsel is quoted as saying to the Judge that “the APA does not employ the use of adjudicatory hearings to investigate issues, and that he believes that the issues brought up by the petitioners have already been addressed.” 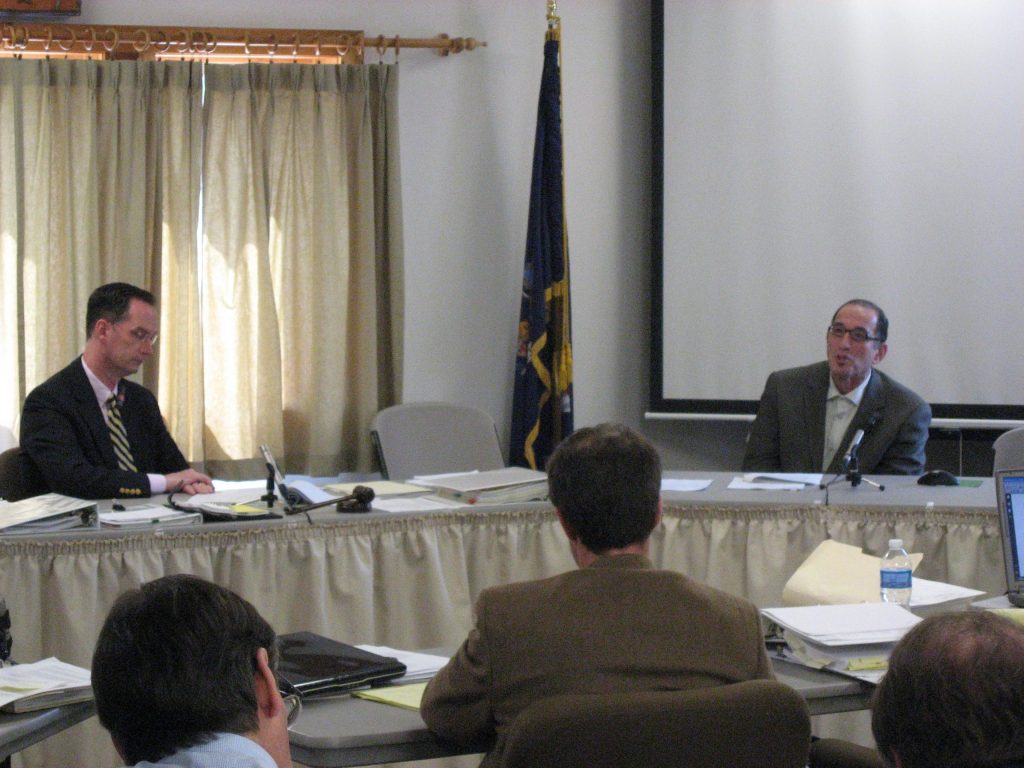 An expert witness, right, testifies at the last (2011) formal hearing held by the APA. The law judge presiding over this hearing is at left.

The APA regulations go on to say: “agency staff, while not a party to the hearing, shall have the right to participate fully in the hearing and shall act as an advocate for a full and complete record upon which an informed decision can be made…agency staff shall state at the outset which of the development considerations and other required findings it considers pertinent to the project and shall briefly outline the evidence it intends to present.”

In other words, APA staff play an active role in issue investigation during a hearing whose entire purpose is to uncover and explore issues pertinent to the application. It’s all very clear in the APA’s regulations and past practice. I cannot understand why today’s APA Counsel would refute his own regulations and years of institutional practice and past precedent – and do so before a justice of the Supreme Court.

As to APA legal counsel’s statement that “he believes that the issues brought up by the petitioners have already been addressed,” it is fine to hold that as belief, but he erroneously lends Supreme Court the impression that APA’s board felt that the staff review had been one-hundred percent comprehensive. In fact, several APA members raised issues or questions that staff did not know the answer to. In fact, at least one condition was added to the final quarry permit as a result of that questioning by the APA members.

Of course, dozens of members of the White Lake community felt that significant issues about the granite quarry’s construction and operation had not been comprehensively or adequately addressed by the staff’s review, and therefore felt compelled to go to court to seek a formal hearing. I hope they are successful.

In April, the following group letter was sent to the Adirondack Park Agency. To date and to my knowledge, there has been no formal reply to this. Here is the entire letter.

The undersigned organizations and individuals have great concerns about the spread of adverse environmental impacts across the Adirondack Park and what appears to be an ongoing resistance by the Agency to hold adjudicatory public hearings under its regulatory criteria.

A number of high-profile, complex land use and development projects with a high degree of public interest and with a likelihood of creating a variety of adverse impacts in the Adirondack Park are now in a pre-application or incomplete application status at the agency.

Many of these meet your Part 580 regulatory criteria for an adjudicatory hearing. Our concern is that the Agency will continue to waive the opportunity to hold such hearings for large, complex projects possessing adverse impacts and a significant degree of public interest, a pattern since 2011 when the last Agency adjudicatory public hearing was convened.

Staff comments on public hearing criteria at the December 2021 meeting suggest that large, complex projects are only recommended for adjudication when there are “gaps in information” presented by the applicant or when staff anticipate that “six or more members of the agency will not recommend approval.”

In fact, under Part 580 of Agency regulations staff and/or the board may recommend a hearing based on:

There is no legal requirement that a project meet each and every one of the regulatory criteria to be sent to adjudication.

During 2022 and beyond, it is of the utmost importance that Agency executive staff, members and designees publicly discuss all adjudicatory hearing regulatory criteria in relation to all large, complex projects with a high degree of public interest so that the possibility exists to bring them to adjudication, and thus to impose substantial conditions, major modifications or, as may be warranted, project denial without prejudice to the applicants.

Thank you very much for considering our concerns.