Paul Schaefer and the making of an Adirondack map 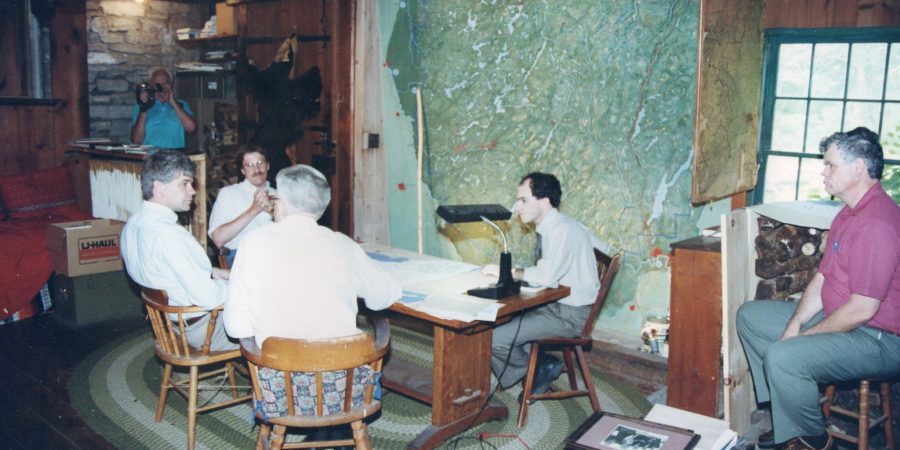 Paul Schaefer and the making of an Adirondack map

The Association for the Protection of the Adirondacks had hired me the previous winter. It was now the spring of 1987. Windows and doors were again opening to the hope and then the reality of spring’s warmth. The director of the Schenectady Museum William (Bill) Verner had given me, practically rent free, a desk and telephone from which to begin work as the Association’s first executive director in over 60 years.

It helped that Bill was a member of my board of trustees, and that his knowledge and love for the Adirondacks and Adirondack history from a home base in Long Lake was long and deep.

By the time I met Bill he had been director of the Schenectady Museum for several years and during that time he had welcomed the Adirondack Research Center (later, the library, or ARL) to the Museum. The ARL was founded at Union College in 1979, but the college’s main library asked the ARL to move in 1985. Bill Verner was a working member of the ARL’s steering committee. Thanks to Bill, my new desk and telephone were placed within the ARL’s walled out library space at the back of the Schenectady Museum.

I quickly learned that 1987 marked the 150th year, or sesquicentennial of the first documented white man’s climb of Mt. Marcy, an expedition led by the man charged to conduct a natural history survey for the state, Ebenezer Emmons, one guided by the legendary Adirondack guide John Cheney. To commemorate the anniversary, Verner and the ARL had decided to create an exhibit of copies of the accounts and etchings made by Emmons and others during the August 1837 ascent. On that journey Emmons named the High Peaks as the Adirondack group and named the mountain after then Governor William Learned Marcy under whose authority the natural history survey was conducted.

As the 1987 commemorative exhibit was underway, a member of the Schenectady Museum’s staff, as I recall it was Gerald Wilcox, thought more was needed to mark the occasion. In his workshop, Wilcox took a blown-up reproduction of the Mt. Marcy USGS quadrangle, traced its contour lines, transferred the lines onto cardboard, cut those cardboard lines, assembled and stacked them so that the Mt. Marcy quad began to take on three-dimensional shape. He then spackled the cardboard, molding the plaster to reflect the topography, removed the cardboard mold, poured Plaster of Paris inside, and cast a positive plaster of the mountain and its immediate surrounding High Peaks. He then painted the model and added bits and pieces for forest realism (like a small bit of mirror for Lake Tear of the Clouds) and built a strong stand for it all to sit on. The heavy Mt. Marcy relief model, about 4 feet square, went on exhibit that spring of 1987 to much acclaim. It inspired me to take my first ascent of Mt. Marcy that summer. 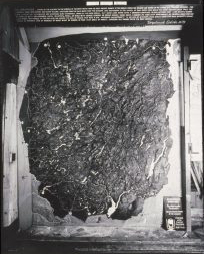 As I was watching Wilcox work, I realized his was the same process that Paul Schaefer’s team of 50 volunteers had used to create, over a span of nine years and 13,000 combined hours, the much larger, 12 ft. tall, 10 ft. wide Adirondack Raised Relief Map at the Schaefer home. In a May 1986 article in Adirondack Life (“the Making of the Adirondack Relief Map”), Paul Schaefer recounted why that project originated in 1945, what it took to create it, and why it remained a learning tool thirty years after its completion in the mid-1950s. Mounted vertically on plywood, the Adirondack Raised Relief Map on Schaefer’s Adirondack Room wall depicted every Adirondack USGS quadrangle in 3D, faithfully molded and plastered, revealing every mountain and hill, every river, stream, lake, and township.

Paul Schaefer (1908-1996) wrote in his book Defending the Wilderness – the Adirondack Writings of Paul Schaefer (1989, Syracuse University Press) that the map project was inspired after a winter 1945 meeting of the North American Wildlife Society in New York City. Paul Schaefer drove his chevy truck all the way on a bitterly cold day and evening. Sitting with him at the dinner was George Marshall, a leader within the Wilderness Society (and the late Bob Marshall’s brother). He asked Paul what he knew about proposed federal dams on the Moose River. George had already seen a US Army Corps of Engineers map of the proposed Panther Mountain Dam on the South Branch of the Moose River. Schaefer famously replied to Marshall words to the effect that “I know nothing about it, but I had better find out.” With those words began the successful, decades-long struggle to save wild, free flowing Adirondack rivers from huge dams.

Howard Zahniser, newly appointed executive secretary of the Wilderness Society, was also at that 1945 dinner in New York City. By the following summer, he and Paul Schaefer launched their 18-year friendship and partnership for Wilderness. Zahniser became the chief author and lobbyist for the National Wilderness Preservation Act of 1964 and helped Schaefer’s allies win the Moose River fight in the Adirondacks.

One of Schaefer’s early strategies to confront the issue was to depict all the Adirondack rivers then threatened by the dam builders. He wrote in Defending the Wilderness:

“On the way home from that meeting, the idea of a relief map came forcibly to me….Several days later, I proposed the idea to the Albany chapter of the Adirondack Mountain Club of which I was a member and asked for volunteers. Fate, at this moment, was very kind. For immediately after my presentation, a tall gentleman stood up and said that since he had been in charge of relief map making for the military invasion forces in the South Pacific, he might be able to help. He was Colonel William Hannah of the United States Army….We moved on it the very next day, getting maps and cardboard and glue and carbon paper. We were off on a project that was to take nine years of effort by fifty individuals and thirteen thousand hours to complete. We found volunteers in a forest ranger, a conservation department biologist, a female captain in the air force, a national conservation leader, scientists from the General Electric Company a carpenter, a stonemason, my family of aspiring Forty-sixers, and all manner of people.”

As the map was nearing completion in the early 1950s, Schaefer reported on its progress to the Association for the Protection of the Adirondacks. Its trustee, Harold Hochschild, was there to hear his report. Hochschild was opening his new Adirondack Museum in Blue Mountain Lake, and wanted a copy made for the museum. Paul made the molds available to Hochschild, who had a cast made by a company in Philadelphia. That copy is still at the museum on a horizontal plane, not the original vertical that still resides on the wall in Paul’s Adirondack Room, now part of the Kelly Adirondack Center of Union College. No more copies were made because the original molds burned, along with many other valuable things, in a barn fire at the Schaefer home during the 1960s. 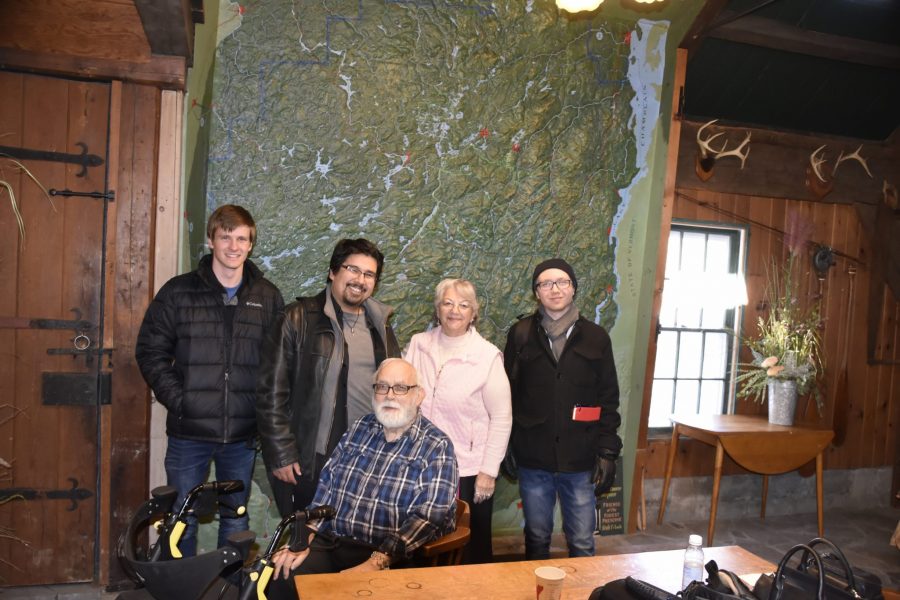 Dr. Ward Stone, Betty Maracle, and Members of the First Nations Technical Institute gather in front of the Adirondack Raised Relief Map after a meeting in 2019. Photo by Dave Gibson

I, like many of you, take any opportunity I get to study the great raised relief map, searching for the Park’s towns and villages, tracing the major rivers coursing out in all directions from the central dome of the Park’s mountains, seeing the great geologic fault lines running northeast to southwest, finding my latest hike or paddle, and realizing all that I missed just past that hill, mountain, lake or flowage that I may have just explored. Just as Paul Schaefer did for forty years, I too have been privileged to use the map as an orientation and teaching tool about the Adirondack Park for curious people of all ages. In a glance, one can quickly appreciate all the Adirondack rivers that were not flooded by the U.S. Army Corps of Engineers. Over the years, it’s greatest worth is revealed in the wondering faces of those seeing the map for the first time, seeking their first or next Adirondack adventure, or simply gaining fresh perspective on what they may have long thought they knew already of this Adirondack land “that nobody knows,” to quote the title of one of Schaefer’s documentary films.

What did Paul Schaefer think of this great contribution to a better understanding of the Adirondacks? I heard Paul talk about the raised relief map dozens of times, but I failed to write down precisely what he said. My colleague Ken Rimany had the good sense to record what Paul said about it one day in 1995, prompting him by asking “tell me about the raised relief map, Paul?” Without hesitation, Schaefer answered:

Paul Schaefer agreed to this formal portrait to show off the great Adirondack Raised Relief Map behind him, and his first book, Defending the Wilderness under his arm. Photo by The Daily Gazette c. 1990. 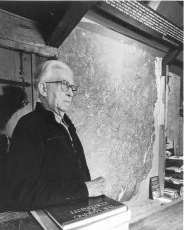 Paul Schaefer agreed to this formal portrait to show off the great Adirondack Raised Relief Map behind him, and his first book, Defending the Wilderness under his arm. Photo by The Daily Gazette c. 1990.

“People are going to marvel at it in the future. Everyone contributed to it, everyone jumped in. You read the article The Making of the Map? Then you know all you need to know. For example, look at this cluster of lakes” (Paul pointed to the St. Regis Canoe Area on the map, using his wooden pointing stick, taken from a beaver dam). “We asked ourselves what a wilderness area these lakes would make some day. And that’s what eventually happened. Fifty-eight lakes of a water wilderness – and the map brought it all out!”

Paul Schaefer’s influence on 20th century Adirondack conservation history has been profound and I thought I knew much of that story, but until I listened to this exchange I had no idea that the making of the raised relief map may have sparked the imagination of those in the early 1970s who first proposed the designation of a St. Regis Canoe Area.

A moment or two after answering Ken’s question, Paul Schaefer added this, which sums up the man and his Adirondack mission very well:

“I’d hate to be living in a place where the Adirondacks or the Catskills were not readily available. I thank God every day I wake up. This kind of country is where I should be. I appreciate that other mountain areas are higher, but none of them surpass us for inspiration.”

Photo at top: Paul Schaefer, his back to the camera, hosts a 1994 meeting concerning the Adirondacks in front of the raised relief map in Schaefer’s Adirondack Room. Joining Paul were, left to right, Joe Martens, Governor Mario Cuomo’s environmental secretary, standing in back with film camera is Paul’s brother Carl Schaefer, seated is Dave Gibson with the Association for the Protection of the Adirondacks, then Dan Luciano, deputy environmental secretary for Governor Mario Cuomo, and on the stool at right Tom Cobb, Trustee and later Board President of the Association for the Protection of the Adirondacks. Photo by Ken Rimany.