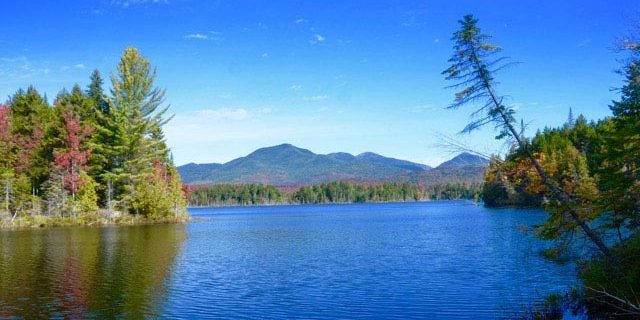 The stress of our sheer numbers on wild lands, other hikers, summit stewards, forest and assistant rangers and local communities and volunteers bordering Rtes. 73 and 86 this hiking season – and many before this – easily disconnects and untethers us from the historical and philosophical roots of wilderness preservation and management.

None of what gets debated weekly about the High Peaks is truly untethered from these historical roots. As Almanack contributor Ed Zahniser has written, “take courage for your own work for visitor use management in wilderness. It has a history, a history set in concern for the common good, a history stemming from the American people’s long-standing concern to protect some remnant of our public lands in their wild, natural state. “

Henry David Thoreau famously wrote “in wildness is the preservation of the world.” He traced the roots of the word wilderness to mean self-willed land, or in our modern parlance the entire biota: land, air, water, flora, and fauna. Therefore, it is important that our modern wilderness managers, trail gurus, and advisory groups grasp that the fundamental character of wilderness resides in its self-willed-ness, in its wildness. Howard Zahniser, author of the 1964 National Wilderness Preservation Act, said we must always keep in mind that the essential character of wilderness is its wildness.

Those historical and philosophical roots are much in evidence within the Adirondack Park State Land Master Plan (2018 update of the 1972 original) and the High Peaks Wilderness Complex Unit Management Plan of 1999, and many other Forest Preserve management plans. The authors and managers of these plans, past and present, are familiar with these roots. Beginning in 1885, the Forest Preserve itself is where those roots started to spread. As Howard Zahniser asserted many times, the Forest Preserve and Article 14 inspired and instructed him throughout his work with the Wilderness Society, work that included 66 drafts of the National Wilderness Preservation Act of 1964. We are, Howard Zahniser maintained, where wilderness preservation began in America.

Beyond the frequent headaches of more of us competing for limited parking space, trail space, summit space on a few popular peaks near Keene and North Elba lies work for wilderness management that many seek because it is more-than-human work for a more-than-human world. This is a world that is deeply rooted in human history – as we evolved with and in a wild state, but this is also a world which transports us outside of ourselves and the mechanized, plugged-in world we typically inhabit.

Whether hiker or not, our species longs to reconnect with wildness and with wilderness in thought and in deed, where we do not dominate the land, where we in fact are called upon to exercise maximum restraint.  Most simply want and need to know that such free-willed land and wilderness exists and functions today. As Howard Zahniser said we all in fact are “part of the wildness of the universe.” Aldo Leopold wrote his famous A Sand County Almanac (1947). Leopold also sat on the first governing council of The Wilderness Society (1935-). Leopold said the weeds growing in cracks in city sidewalks teach the same ecological lessons that Redwood trees do. In other words, the wild is ever at hand.

The naturalist John Hay wrote that wilderness is not just designated areas but “the Earth’s immortal genius.” This is the sense in which Gary Snyder says wilderness is the “planetary intelligence.” Ed Zahniser’s writing reminds me that wildness is as close as the teeming number of mites living on my and your scalp. We come into and leave this world as wild things. Wildness can be that close and that personal.

Moving from the personal to the practical, how do we keep the wildness in wilderness? One way is through user management. How to we obtain excellence in that? Partially, through regular training. As my former board chair Peter Brinkley asserted at a Wilderness Conference we sponsored in Old Forge some years back “nobody with a straight face can tell me that we have today the training facilities and programs for our wilderness students, managers and administrators that match our mountains.” We need training commitments and resources that will match the mountains in terms of prominence, excellence, and permanence, he continued. This is not just a state responsibility, but requires and deserves private sector partners, he concluded.

Our conference near Old Forge was designed with the premise that folks are not born to be wilderness stewards. Care and stewardship can be stimulated by our life experiences, but it is also learned activity. Joining our Old Forge conference was the then director of Arthur Carhart National Wilderness Training Center in Missoula, MT. Connie Myers explained its origins:

“Members of the Congress were appropriating money for training in this area that was not being well spent. These members audited the federal government and this led to an intensive wilderness planning effort, as well as legislation to create a center and research institute devoted strictly to training people for the mission laid out under the National Wilderness Act of 1964. Our mission extends beyond the federal agencies and involves the public in our training.”

She further explained that the Carhart Center, named after a young federal employee who called for wilderness conditions on federal land in Colorado back in 1919, was comprised of just seven employees representing the National Park Service, US Forest Service, US Fish and Wildlife Service and Bureau of Land Management. It has a board of directors with university partners. “Networking with others and exporting the training beyond Montana is a critical job at the Center,” she said.

Myers offered to help New York put together a course for and about wilderness here and our needs for wilderness user management. “We are here to help,” she said. She also advanced the concept of a professional organization devoted to the needs of those working in wilderness stewardship and education. “While the Carhart Center does not directly advocate for Wilderness designations and protection, she said, “we train people in awareness and compliance with the National Wilderness Act and strive to always be at the table when wilderness issues are under discussion.”

“Wilderness trainers are too much like the boy and the girl walking on parallel trails and forgetting to hold hands,” she said. In other words, do not feel isolated and do not reinvent the wheel. Instead, “only by holding hands will we be able to move forward for Wilderness.”

Echoing her was another conference participant who worked for the White Mountain National Forest in New Hampshire. “We need constant communication and dialogue to preserve and restore the Wilderness areas that we enjoy,” said Rebecca Oreskes. She proposed a wilderness stewardship training workshop involving students, trip leaders, rangers, and managers from the White, Green and Adirondack Mountains. “Why not have home-grown, on-the-ground stories and demonstrations of what is working and what is required to be a wilderness steward” she asked. Our planning varies from state to state, but “we have an enormous amount to share with each other.”

So, what happened? A few years later, we sponsored a National Wilderness conference at Lake George, the purpose of which was less on philosophical underpinnings and more on case studies of how to preserve, maintain and restore Wilderness resources, and the tough alternative management choices that must be weighed and judged. That conference also brought in state and national wilderness leaders. Dr. Chad Dawson, then professor of recreation at SUNY College of Environmental Science and Forestry, led the planning of that event. For the past four years, Chad has served the public as a member of the Adirondack Park Agency, where his advice and assistance on matters of wild land and water recreation management is much in demand. Chad’s deep and detailed knowledge of wilderness user management is always close at hand for readers of Wilderness Management: Protection and Stewardship of Resources and Values (Dawson and Hendee, editors, 4th edition, 2009). 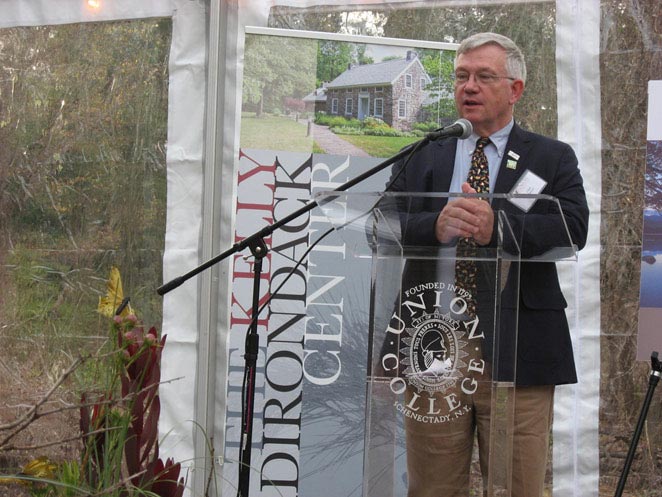 Dr.Chad Dawson addresses the significance of the 50th anniversary of the National Wilderness Preservation Act, May 2014. Photo by Adirondack Wild

Another point of progress: Walter Linck and Karyn Richards, of the Adirondack Park Agency and Department of Environmental Conservation respectively, spearheaded in-house Forest Preserve training for their agency’s public land teams. I heard about some of that training and was invited to one of the sessions. It was stimulating. Lots of folks seemed engaged and good questions and answer sessions about perplexing management issues ensued. Unfortunately, this joint APA-DEC training initiative lacked permanence and, to my knowledge, has not been repeated in recent years. However, periodically I hear that DEC sends staff selectively to attend training at the National Fish and Wildlife Training Center in West Virginia. I do not know if that continues.

DEC’s program of backcountry stewards, May-October, did germinate and grow and has sustained itself, as has the department’s once a year annual training for all the stewards, front and backcountry including the Summit Stewards. It was scheduled in 2020 but had to be cancelled due to Covid.  Also, not for profit organizations have stepped up to fill this important need for annual training, from summit stewardship to aquatic stewardship on our lakes.

Is the constant communication and training necessary to preserve and restore the Wilderness areas that we all enjoy meeting the challenge set at the Old Forge conference? Do we, as our former chair Peter Brinkley asked, have the training facilities and programs for our wilderness students, managers and administrators that match our mountains? Not even close. Much progress has been made, but it appears insufficient.  The NYS Forest Preserve in the Adirondack and Catskill Parks, the only constitutionally protected set of forest ecosystems in North America, deserves a prominent, permanent, and excellent training center for wilderness user management and networking. Perhaps this becomes a joint training center with the White and Green Mountain National Forest staff. We do have an enormous amount to share with each other.

For this post I borrowed heavily from Ed Zahniser’s presentation “Visitor Use Management in Wilderness” at a Carhart Center workshop in Sturbridge, MA. titled Working for a Wilderness Forever: The Real Work of Wilderness Preservation for Our Historical Moment. Thank you, Ed. Ed Zahniser retired as the senior writer and editor with the National Park Service Publications Group in Harpers Ferry, West Virginia. He writes and lectures frequently about wilderness, wildlands, and conservation history topics. He is the youngest child of Alice (1918-2014) and Howard Zahniser (1906–1964). Ed’s father was the principal author and chief lobbyist for the National Wilderness Preservation System Act of 1964. Ed edited his father’s Adirondack writings in Where Wilderness Preservation Began: Adirondack Writings of Howard Zahniser, and edited Daisy Mavis Dalaba Allen’s Ranger Bowback: An Adirondack farmer – a memoir of Hillmount Farms