Speaking Out for our Vulnerable, Short-Staffed DEC Forest Rangers

The year 2020 finds NYS DEC Forest Rangers, the men and women in the front lines of contact on the Catskill and Adirondack Forest Preserve, increasingly vulnerable. The sheer volume of demands on a field Ranger’s time and skills increase annually while their numbers remain stuck where they were fifty years ago. Adirondack Wild is acting to address this problem.

For example, in the 275,000-acre High Peaks Wilderness region of the Adirondack Park, where many public emergencies occur, there are 10 fewer Forest Rangers working today than were working the same area fifty years ago. Just 106 Forest Rangers serve statewide today – while the total statewide acreage of public lands and conservation easements has grown by a million acres since 1970.

By contrast, the 2.2 million- acre Yellowstone National Park employs three times the number of Rangers than we do for our 5 million acres of public lands, waters and easements across the State of New York.

Statewide, DEC Forest Rangers recently conducted 346 search and rescue missions, extinguished 105 wildfires that burned a total of 845 acres, participated in 24 prescribed fires that burned and rejuvenated 610 acres, and worked on cases that resulted in 2,354 tickets or arrests.

Yet, statewide statistics don’t tell the full story. In the High Peaks alone, search and rescue incidents have kept pace with trailhead registrations, both doubling since 2007. Hikers there are trying to park 2000 cars on a busy weekend when space allows for just 1000. On some weekends, a skilled backcountry ranger is employed full time handing out parking tickets along Rt. 73. That same ranger is, therefore, unable to patrol as many backcountry trails, unable to communicate with as many overnight campers, and unable to enforce wilderness regulations deeper in.

Rangers are also restricted in how often they are re-equipped, what they can spend and how many miles they can drive. Their non-personnel budget has been cut 40% from ten years ago. As one Ranger explained, “with cuts this deep, we’re struggling. We are performing as Rangers, but not nearly at the level we could be.”

The thin green line protecting New York’s public lands and those who recreate there is dangerously thin. Increases in the authorized number of Forest Rangers are badly needed. Adirondack Wild will be part of a larger coalition asking for a modest increase of 20 more Forest Rangers in this year’s State Budget. Forest Rangers themselves state that the force must be doubled to truly address needs on the Adirondack and Catskill Forest Preserve and elsewhere on our State Forests and Wildlife Management Areas.

Administration of the Forest Rangers is also vulnerable. Vacancies exist at the top, veteran supervisors are retiring and not being replaced. A much larger force of 330 DEC Environmental Conservation Officers, the law enforcement arm of the DEC, may be asked to step in to supervise the Forest Rangers. That move would threaten morale. Forest Rangers are not paid as much as the ECOs and that pay discrepancy has festered for years. Resolution of that appears in limbo.

Six organizations from the Catskills and the Adirondacks have recently written to DEC Commissioner Seggos and Governor Cuomo to ward off any attempt by the Cuomo administration to merge the Forest Rangers and the ECOs. Adirondack Wild took the lead in organizing the letter and press statement. See them both here:

To conclude, this is a year to speak out strongly for the Forest Rangers. They know our wildlands best and feel a deep sense of fulfillment and obligation to stewardship and public contact in the outdoors. As one Ranger told us, “we must remain approachable to the public.”

When it comes to the Forest Preserve and other wildlands that demand care, stewardship, regular patrols and first responders, Forest Rangers are trained and prepared to do that job with excellence. As a field ranger has told us, “you can teach enforcement, but you can’t teach a love for being in the woods, and for communicating with the public. I love this job for those reasons.” 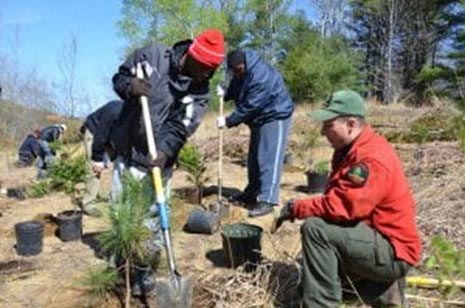 A DEC Forest Ranger teaches a young man how to plant a tree on the Forest Preserve above Lake George. Photo by Dave Gibson