The End of Arbitrary Powers to Dam Adirondack River 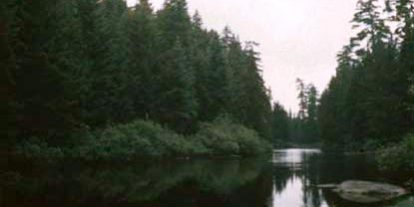 The End Of Arbitrary Powers To Dam Adirondack River 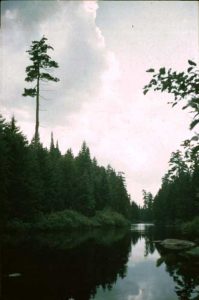 The Indian River in today’s Moose River Plains Wild Forest, which would have been flooded out by the dams. Photo by Paul Schaefer

The State Legislature has just adjourned, but on a good many nights this past month I grew sleepy watching legislative TV or legislative proceedings on the internet. For the non-debate pieces of legislation, meaning when the legislative majority is not allowing minority debate on bills, the viewer is treated to the following exchanges in a monotone, one after the other:  The speaker or his representative, or the Senate president or her representative: “The clerk will read the bill.” The clerk: “a bill to” …whatever it does. The speaker or his representative: “The clerk will read the final section.” The clerk: “this act shall take effect immediately.” The speaker, president or their representative: “The vote: 63 in favor. The bill is passed.” All of that has taken less than ten seconds. Next.

The votes, usually unanimous from the party in the majority, were tallied earlier. That is how dozens of bills get passed this time of the year. Some of them are very important bills, affecting people in all sorts of important ways. To be honest, when allowed by the majority some of the debates on the floor are, in fact, interesting to listen to.

There are less predictable moments than these.  I witnessed a few related to protection of the Adirondacks, especially following the Adirondack Park’s Centennial year (1992) when there was plenty of tension surrounding legislation, such as the statewide Environmental Protection Fund which passed both chambers around 4 in the morning in June 1993.

However, nothing I ever witnessed or heard about from others rivaled an event witnessed at the State Capitol by the late Adirondack wilderness coalition leader Paul Schaefer. Paul asked several of us who heard him tell this tale one evening not to mention it afterwards or, if we did, never to mention names. The event Paul witnessed took place in 1953. Only about 40 years had passed since Paul told us about it one evening at his Adirondack cabin. As of 1992, Paul felt the people involved might very well still be alive and, if so, might be embarrassed to read the story.

Paul died in 1996. I have kept my promise to him not to tell the story. I am sure others in the room have as well. Now, 68 years since the event in question I feel that even Paul would be all right with my inadequate attempt to retell it without naming names.

Saving Adirondack Rivers via the State Constitution’s Article 14: A piece of state legislation with great consequence for Adirondack free-flowing rivers was on third and final reading in the State Senate in the spring of 1953. It would amend Section 2 of Article 14 of the NYS Constitution that since 1913 had authorized up to 3 % of the Forest Preserve “for the construction and maintenance of reservoirs for municipal water supply, for the canals of the state, and for the construction of reservoirs to regulate the flow of streams.” At issue in 1953 was the final purpose of Section 2, reservoirs to regulate the flow of streams.

Between the two World Wars and especially just after WWII, powerful upstate political, commercial, and industrial interests had combined their influence to promote the engineering and construction of large hydroelectric dams on north country rivers to power industry. Due to a controversial 1913 amendment, our “forever wild” constitution allowed up to 3 % of Forest Preserve, many tens of thousands of acres, to be flooded for that purpose.

Dams proposed to be built on the South Branch of the Moose River, Higley and Panther Mountain dams, were just two of several dozen dams proposed by the powerful River Regulating Boards of the state (forerunner of the current Hudson River-Black River Regulating District). Several dozen more were also planned elsewhere in the Adirondacks, including plans to build higher dams and expand the size of Piseco Lake, Lake Pleasant, Goodnow Flow, Cedar River Flow, Elm Lake, Thirteenth Lake, Boreas Ponds, Cheney Pond, the Upper Hudson River, Schroon River, Indian Lake, and the Essex Chain of Lakes.  These projects were couched to have the public benefit of flood control but were actually to spin turbines and power industries in cities downstream, such as Watertown.

It was all a very close call, politically speaking. As Paul Schaefer wrote during that decade of 1945-55, “at present a river regulating board can propose a dam anywhere in the State, can hold hearings, then can ignore those hearings and decide to proceed with its plans regardless of any objections.” Such river regulating boards “can ignore any evidence that such a dam may not be in the public interest and proceed to build it – and no state officer, no state department, the Legislature or any elected official can overrule” the River Regulating Board.

Right after WW II, Governor Dewey, and the State’s Attorney General both agreed they had no power to block dams like Higley and Panther deep within the Adirondack forest. Legislative leaders agreed. Paul Schaefer’s committee and grassroots organizing appeared to be a lost cause before it had even begun.

The Importance of the Legislative Study of Rivers: But, by 1949 something important happened which began to even the odds. Paul and allies convinced the NYS Assembly Speaker Oswald Heck and Assemblyman John Ostrander to create the Legislative Committee on River Regulation to study the issues surrounding the regulation of the state’s river flow and the building of multiple reservoirs. Ostrander called the first meeting to examine the Higley and Panther Mountain reservoir proposals. Paul Schaefer volunteered to be the Ostrander committee’s secretary. Sunlight would finally be shed on the dam proposals, and sunlight is a powerful disinfectant. 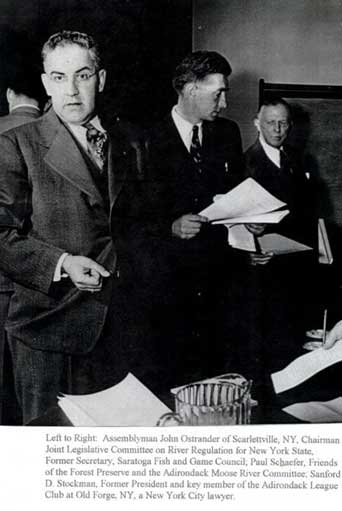 Out of that first meeting grew a series of public hearings in Schenectady, Buffalo, Albany, Watertown, Cranberry Lake and New York City. Published reports of the Ostrander committee’s hearings followed. At one hearing, in Buffalo, State Comptroller Frank Moore, later to become Lt. Governor, rose to say, “I am wholeheartedly in favor of a constitutional amendment which will grant to the people of this state the right to approve or reject in referendum proposals to construct reservoirs in the Adirondack Park.”

Moore’s dramatic proposal, to strip from Section 2, of Article 14 the constitutional right to use up to 3 % of the Forest Preserve for the regulation of streams (read reservoirs), but instead to put the question of more dam building directly into the hands of the public posed a significant threat to the power of the river regulating districts and their allies. Moore’s position stiffened the spine of others and suddenly there was a movement to amend Article 14 as the surest way to preserve free-flowing Adirondack rivers. It was called Amendment No. 9.

Amendment No. 9: “Amendment Number 9 will end the exercise of such arbitrary power,” Schaefer wrote. “It will provide an effective check on the state’s most notorious, freewheeling, unregulated, quasi-public committee. It will ensure that the incomparable natural beauties of your Forest Preserve shall remain dedicated to watershed protection and as a permanent recreational area for all the people of the state.”
For the first few years, the amendment failed to pass in the state legislature, so powerful were the political, industrial, and commercial forces arrayed against it. It was defeated in the legislatures of 1949, 1950 and 1951. But grassroots momentum for its passage had been building throughout these years. Conservationists from across the state, but also from other states, and staff from the federal US Forest Service, Fish and Wildlife and Soil Conservation services testified at the public hearings about the importance of maintaining Adirondack rivers in their free-flowing, natural condition. Publicity surrounding the hearings and findings of the Legislative Committee on River Regulation was, of course, led by Paul Schaefer. In this PR campaign he had a lot of help from the members of the Moose River Committee. During this time Paul created Friends of the Forest Preserve as an umbrella under which many organizations could rally to protect the preserve.

Amendment No. 9 to prohibit all dams that regulate the flow of streams if the reservoirs involved any portion of the Adirondack Forest Preserve finally passed the state legislature in 1952. But amendments to the State Constitution require votes by two separately elected legislatures. So, following the 1952 election a new legislature was considering the amendment in 1953 when the events Paul Schaefer told us about at his cabin in 1992 took place. Again, at Paul’s insistence I leave out the names.

The aide quickly left the chamber himself and followed the State Senator down the hall into a nearby washroom. On entering, the aide found the Senator flushing the bill to amend Article 14 down the toilet. The aide pushed the Senator aside, grabbed the wet piece of legislation and returned to the Senate chamber. After handing the dripping bill to the Lt. Governor, the latter was heard to say: “the next man who tries to take this bill I will personally hit with this gavel.”

The People Decide: The bill to amend Article 14 passed the Senate on that day and went before the voters in November 1953. The final tally was 1,002,462 in favor, 697,270 opposed, a margin of just over 300,000 votes. The victory had great consequence. It ensured from that day to this that, as Schaefer wrote, “any proposal to build a dam in the Forest Preserve will get a full airing before the Legislature and the people, and in each case will be decided upon its merits. This will make it extremely difficult for private interests to invade the Forest Preserve with the excuse the dam is necessary unless they were in a position to prove their point.”

With this victory Paul Schaefer’s grassroots coalition, the Moose River Committee, had gained state and national stature. Two years later, in 1955, the same powerful commercial interests of 1945-53 got Panther Mountain dam on the South Branch of the Moose River onto the state ballot. It had to gain public approval as a consequence of the 1953 amendment. A small portion of the Panther Mtn reservoir would impact on the Forest Preserve. Therefore, the people were the ultimate arbiter, not the regulating district. In 1955, Panther Mtn reservoir was defeated by over a million votes statewide, or 700,000 more votes than the conservationists received in 1953.

After that vote, Paul Schaefer wrote: “It seems incredible that even with all this help we were able to pull back from the brink of disaster to that marvelous Moose River country. A citizen may not have title to his home, but he does have an undivided deed to his Adirondack land of solitude, peace and tranquility. To him the South Branch of the Moose River is a river of opportunity, for he has come to regard it as the front line of defense against commercial exploitation of his Forest Preserve. We have been on the defensive too long. It is time to gather our forces and accomplish things that heretofore have been but dreams.”

Lessons: Whenever I feel discouraged by the State Legislature’s, or the DEC’s, or the APA’s or the Governor’s failure to advance something important for the Adirondack Park or the NYS Forest Preserve, I know Paul Schaefer would be telling me once again about the Moose River Committee, ordinary people joined together in ten years of struggle against powerful opponents. They experienced numerous setbacks and faced grievous disappointments. Yet, thanks to their broad base of support, perseverance, love for the wild outdoors, publicity, strategic and tactical moves, and influence with state leaders they enjoyed ultimate success with the voters. The majority of voters in 1953-55 were not fooled by the false dichotomy presented to them of the environment versus the economy. They viewed the conservation of the Adirondack Park’s wild, free-flowing rivers not pitted against its economy, but a very source of Adirondack economic strength. It is indeed time again to gather our forces and accomplish things that heretofore have been but dreams.