The Voluntary Professionals Behind the Adirondack Research Library 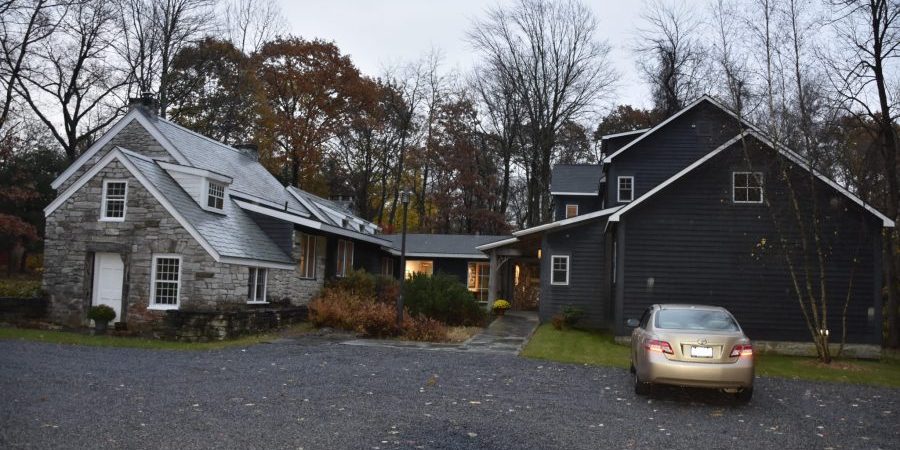 The Voluntary Professionals Behind the Adirondack Research Library

Many organizations introduce their work with the words “were it not for the volunteers, we could not…” That can be justifiably said of the Adirondack Research Library (ARL), formerly part of the Association for the Protection of the Adirondacks (AfPA).

This largest Adirondack collection outside of the Adirondacks launched in 1979 as part of Union College’s Schaeffer library. It then moved and in 1985, courtesy of then Museum Director Bill Verner (formerly curator with the Adirondack Museum in Blue Mountain Lake) occupied a corner of the Schenectady Museum. In 1988, ARL became a committee of the nonprofit Association for the Protection of the Adirondacks (1901-2010). Following the untimely and sad death of Bill Verner, in 1989 the Schenectady Museum’s next director told us we had to move out. So, for the next 15 years the AfPA and ARL rented space below a dental laboratory in Schenectady. Suffice it to say, that situation was less than ideal. We made the best of it but dreamed of better opportunities. Much better opportunities.Early in 2005, following a seven-year capital campaign and building project led by Ken Rimany, the AfPA and ARL moved into newly built Center for the Forest Preserve at the former home of the Schaeffer family: Paul, Carolyn and their four children, where it remains to this day under the outstanding care of the Kelly Adirondack Center of Union College. For more about the ARL, visit www.union.edu/adirondack-research-library.

From 1979 to 2005, every book, every manuscript, photograph and special collection in the ARL was moved, shelved, catalogued, repeating itself many times over by volunteers who also manned the phones and handled a great diversity of research requests. Seasonally, ARL also sponsored public lectures about the Adirondacks. These were the volunteer professionals of the Adirondack Research Library.

In the past several weeks, we have lost two former ARL chairs both of whom led by example. Patricia (Patty) Prindle of Schenectady and Peck Lake, Gloversville, died in her 90th year. Patty chaired the ARL from 1993-1999 and was devoted to this Adirondack collection and to all those using it. A retired teacher of high school mathematics and a voluntary outdoor instructor at Historic Cherry Hill and Five Rivers Environmental Education Center, Patty got to know our Adirondack collection beginning in 1989. She got to know it so well that she could locate virtually any document for Adirondack students, researchers and writers. For years, she was the library’s go-to person and the coordinator of all of its other volunteers. There was no library task too mundane or search request too arcane for Patty. Her abilities to cheerfully do it herself but also to inspire and delegate tasks to others were remarkable and a rare combination. In her role as ARL chair, she also became ex-officio Trustee of the Association for the Protection of the Adirondacks where she participated actively in its board and staff affairs for many years. Her many friends at the ARL, AfPA and Union College’s KAC will miss her greatly. 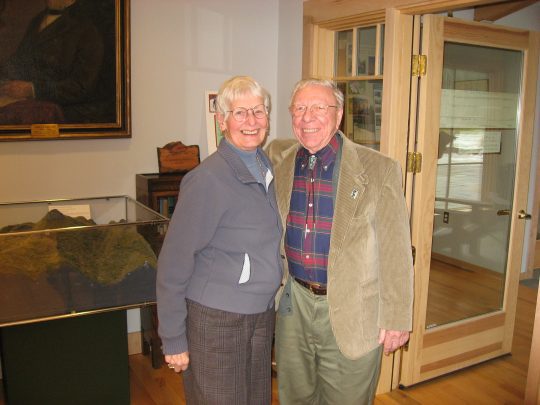 Anne Weld, left, Chair of the ARL with Peter Roemer, Trustee of the AfPA, c. 2005. Photo by Dave Gibson

Anne Weld also died recently at age 98. Anne was a dear friend and influential, steadfast and generous Trustee of the Association for the Protection of the Adirondacks, who also chaired its Adirondack Research Library after its move to the Schaefer home in 2005. A retired secondary school laboratory instructor, Anne lived in Niskayuna and Upper St. Regis, NY, where she hosted many meetings and informal gatherings of the Association. Earlier in her life, she and husband Phil opened and operated a camp on nearby Lake Clear where both taught sailing and were immersed in Adirondack canoeing, hiking and camping expeditions, influencing generations of Adirondack outdoor enthusiasts. Later, Anne chaired the Upper St. Regis Association, where she championed Upper St. Regis Lake, Spitfire Lake and its entire community of life. Anne devoted time and efforts at the Adirondack Museum and Paul Smith’s College.

As ARL chair, Anne was level-headed, pragmatic and welcoming of ideas and opinions. These were not easy years for the library. Despite its move to more spacious, environmentally appropriate quarters, everyone knew that after 25 years its growing size and increasing expectations of the Adirondack research community required its own paid staff. Anne knew it, too. But she, like her friends and colleagues, soldiered on and kept the library open. Anne’s move to the Schenectady area made her a regular presence at the ARL. We were blessed to have her in our midst there and in the Adirondacks, especially on Upper St. Regis Lake where she made us feel so welcome. She guided us in many favorable directions and would want us to carry on.

The Adirondack Research Library has survived and since 2011 has had that professional library and archival staff direction courtesy of Union College. The ARL’s college-level professionals ended the history of its devoted volunteers. For over 30 years, nobody was paid to keep the Adirondack Research Library collection functioning and available for public use. The work was sustained out of devotion to citizen studies of the Adirondack region, and out of the many lasting friendships made along the way.

Thanks to the ARL’s co-founder, volunteer and Adirondack author Edith Pilcher, there is a chapter in an organization history devoted to the ARL. Edie wrote the Centennial History of the Association for the Protection of the Adirondacks in 2003. In it she lists all of the ARL chairs up until that year: Edith Pilcher, Carl George, Tom Cobb, Ennis Pilcher, Bill White, Jim Dawson, Paul Bray, Maryde King, Patty Prindle, Abbie Verner, Dick Tucker; and the ARL’s consultants, including Chuck Brumley, Warder Cadbury, Tom Cobb, Carl George, Ed Ketchledge, Peter Pape, Clarence Petty, Norm Van Valkenburgh and Don Williams.

In her history, Edith Pilcher writes that “In the fall of 1978 Paul (Schaefer) taught a non-credit evening course at Union College entitled The Adirondack- The Land Nobody Knows. His fervent enthusiasm for Adirondack books, art, history, geography and politics was contagious…Paul invited several class members including my husband Ennis and me to attend a meeting in his home library, his “Adirondack Room,” where he expressed a wish that his collection of books and documentary materials could be utilized by a wider community…It was agreed to establish a Special Adirondack Collection at the Union College Library. This was the genesis of the Adirondack Research Center (Library).”

Pilcher’s history continues: “Two major archival collections were donated during our first year, both unique and very valuable. One was copies of the archive of the Association for the Protection of the Adirondacks. This included reports, minutes, correspondence and other records from 1901 to the present. These constitute a fascinating glimpse of regional political history. It records how a well-informed and concerned citizen group has affected legislation and other actions over the course of a century.”

“The John S. Apperson Special Collection contains reports, photos, correspondence, legal briefs, and other records from a notable conservationist who worked in Schenectady from 1900 until his death in 1963…These papers have been painstakingly preserved and organized by four of Apperson’s younger associates, Philip Ham, David Newhouse, Arthur E. Newkirk and William M. White, Jr. “

How did the ARL operate week to week? Edith Pilcher writes: “Wednesday is a regular work day at the ARL and often a dozen volunteers are present, working at a great variety of tasks – cataloguing books, organizing archives, compiling indexes, filing , feeding photos into the new computer to compile a photo database, working on maps, repairing books, sorting and filing catalog cards, assisting researchers, and the other hundred jobs connected with library maintenance. The work continues for eight or nine months out of the year. Most of our volunteers have worked together for many years and many have attended library workshops. Consultants have taught us methodology for working on archival collections.”

Pilcher continues: “In 2001 we received a Map Cataloging Grant from the Capital District Library Council. Volunteers worked alongside CDLC archivists identifying and describing over 2000 maps. Another recent coup was purchase of a unique collection of 52 photographic proofs which once belonged to Verplanck Colvin and were intended for use in his reports for the 1880s and 1890s. Many were never published.”

Pilcher recounts how in 1998 the Association asked a professional at the Adirondack Museum for an assessment of the ARL as the library collection neared its 20th anniversary. “Jerold Pepper, Librarian of the Adirondack Museum, undertook the task and issued a report. He determined that ARL has the largest collection of Adirondack-related items in the Capital District, larger than the New York State Library, the State University at Albany, Union College, RPI or any other college or public library in the area.”

Pepper’s report criticized the then basement location of the ARL ( for many a good reason ), a problem solved eventually with the 2005 move to the new Center for the Forest Preserve (aka, the Schaefer home). Pepper concluded that “big manuscript collections are high maintenance acquisitions, requiring substantial investments of labor and space…Libraries are increasingly reluctant to accept large manuscript collections without an accompanying donation to support their care.” That large donation eventually materialized in 2011. Longtime ARL volunteer and Union College professor emeritus Carl George was instrumental in persuading the College to assume management responsibilities here.

Edith Pilcher writes of many coups during the ARL’s history. For example, a skilled chair of the ARL, Maryde King, now with her husband Larry a resident of Johnstown, NY, made a singular contribution to the history of the Adirondacks by publishing Adirondack Surveyor Verplanck Colvin’s final, unpublished 1898 survey of the Adirondacks. The original Colvin manuscript had been sitting in the old Conservation Department, then the DEC, for 60 years until it was donated to the ARL by DEC’s Norm Van Valkenburgh in 1980. Other ARL volunteers had typed this lengthy, technical manuscript onto paper, but Maryde King (ARL Chair from 1989-1993) took an entire summer to enter the manuscript into a computer. She then located unique accompanying photographs of Colvin’s field crew and equipment, found a book publishing company, helped launch the prepublication fundraising necessary and, once all of that was accomplished, hand-tipped Colvin’s hand-drawn maps into the book, finally published in 1989.

Rise and applaud the volunteer professionals in your midst.