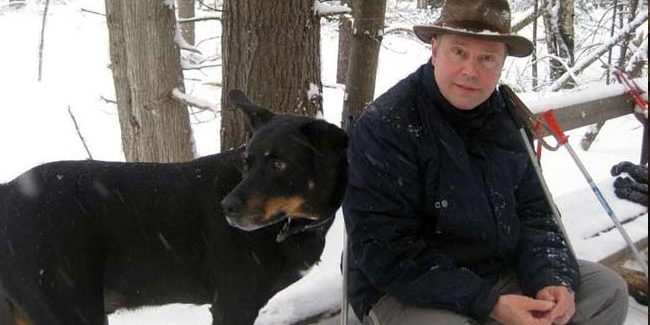 As the nice weather comes upon us, some of us wish to get out into the great outdoors, our parks and forested areas.  But oh yes, there’s one little problem, Lyme Disease.   “Remember, Knowledge is Power.”

Lyme Disease comes down to ONE SIMPLE FACT: Lower numbers of ticks attaching themselves to White-footed Mice, equals lower cases of Lyme disease.  How is this achieved?  “Complexity Brings Forth Stability” In other words:  Biodiversity!

Recent studies by Dr. R. Ostfeld and others from the Cary Institute of Ecosystem Studies has shown, there are three major factors contributing to Lyme Disease. (1)  Habitat Fragmentation; (2) Lack of Predators; (3) Compromised Dilution Effect.

(1) Habitat Fragmentation: When forested areas are cut up into smaller patches of land for suburban housing and mall development, along with other kinds of ecological simplification of woodlands, this turns out to be prime habitat for white footed mice, (Peromyscus leucopus).  More mice, the more chances of ticks contracting Lyme from infected mice and transmitting the disease to humans. 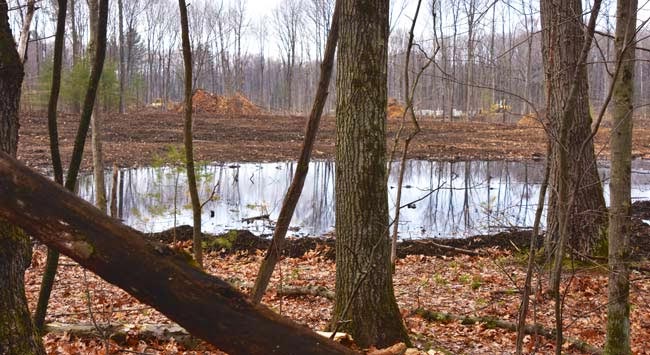 This former canopied forest along with its vernal pool in the foreground was fragmented by new residential development, decreasing its ecological health and increasing habitat for white-footed mice, prime vectors of tick-borne illness. Photo by D. Gibson

Forested areas cut into five acres or less tend to have the most dramatic effects, favoring the transmission of the spirochete, Borrelia burgdorferi, (Lyme disease), from mice to ticks to humans.  Recent studies have shown forested areas fragmented into smaller parcels of land tend to have more white-footed mice per acre.

Also, fragmented habitats tend to have fewer other animals included within its ecosystem, such as chipmunks, gray squirrels, and other ground animals competing for the same food stocks which helps to lower the mouse populations.

(2) Lack of Predators: Fox, raptors, (owls, hawks) and other predators play a critical role in lowering rodent numbers which, in turn, is beneficial to human health.   Predators feeding on mice help to lower the chances of ticks attaching themselves to white footed mice and contracting the diseases.

When intact forests are carved up into smaller woodlands, this limits the number of predators preying on mice within a geographic area.  Remember, more mice, more possibility of Lyme disease.

The use of rodenticides to kill mice is counterproductive in controlling Lyme. Mice leaving homes after ingesting rodent poison puts birds of prey in jeopardy.  Eating mice contaminated with mouse poison, (which is known as secondary poisoning), is deadly to raptors.

(3) Compromised Dilution Effect:  In the northeast and central United States, white-footed mice are normally the most numerous vertebrates on the forest floor, this enhances the chances of ticks feeding from mice.   Weather, predation and food supply also are deciding factors on mouse numbers.

Other factors that help to abate the number of Lyme disease cases per year are more predators feeding on mice, which then lowers the vector population.  The number of other animals (chipmunks, squirrels, turkeys, etc.) on the forest floor consuming and competing for food (nuts and seeds), also helps to lower rodent numbers.

The more nuts and seeds consumed by other wildlife which than decreases the possibility of mouse -tick interaction, lessening food for mice which translates into fewer mice.  Lyme disease cases in the northeast can be predicted by the yield of oak tree nuts fallen the year before. Once again, less nuts, less mice.

Over the years biologists, wildlife management personal and sports men and women have underestimated the power of predation and the beneficial effects it has on the natural order of things.   Scientists have learned that predator-prey relationships are absolutely essential for ecological systems to function properly.

It wasn’t until ecologist Aldo Leopold came along in the 1930’s and 1940’s that sentiments began to change.  Leopold, author of the famous A Sand County Almanack, documented the role predators play in keeping ecological systems healthy and stable, or what is now known as trophic cascade.

Leopold understood that without predators, weak, sick individuals are left to reproduce, consuming food supplies and further diminishing their natural environment.  In some cases, this may precariously translate disease all the way up the food chain to us humans.

Although Lyme disease is here to stay, it is through smart ecological choices that we will be able to keep this disease at bay!